Last night (Friday 2nd) CUOC attended the bimonthly EAOA committee meeting for what was widely thought to be "the first time since Mark Collis". A great many things were discussed, including dissatisfaction at British Orienteering's methods of operation (what's new?), the possibility of new kites to replace the off-white and faded pink kites seen last weekend and the relative merits of Jammy Dodgers.

The CUOC video was mentioned as an example of a video that is a bit more exciting than British Orienteering's latest effort. I'm going to use it as an excuse to bump it back up to the top of the homepage. If you haven't seen it, you need to watch it! And if you have, watch it again for the orienteering goodness! 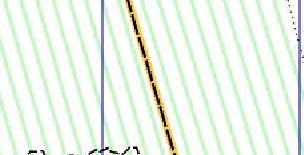 The great controversy of the evening concerned the use of non-standard symbols for mapping areas of Thetford Forest where linearly sown plantation trees had been brashed such that a line of fairly impenetrable brashings followed the line of the trees. This makes the forest very runnable if running parallel to the brashings, but impassable if running across the brashing walls. At the West Harling Heath race last Sunday, a sort of directional linear pale green symbol had been used (see picture!) but this is not a standard symbol. There was a suggestion the the undergrowth symbol be used instead, but this does not show direction of runnability. What about the Vegetation: runnable in one direction symbol? It isn't really vegetation... the debate rumbled on for a bit, but ultimately it is OUR decision, because the next map that might be produced with such a symbol is CUOC's! Email the captains if you have a strong opinion.