CUOC win Womens A & Mens B competitions and beat Oxford at drinking. 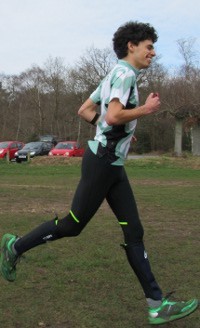 At the crack of dawn last Saturday (10 March), 21 CUOC athletes boarded a coach bound for Burnham Beeches, the 2012 Varsity Match and a date with destiny. And only two athletes forgot to set alarms. As the biggest CUOC team since 1986 hurtled towards the enemy both the men and the women were quietly confident, although some of them may have been quietly asleep. For the women, the worry was how many hours they could beat Oxford by; for the men, how to lose respectably to a team of GB runners.

Burnham Beeches is a fast, runnable woodland near Slough described by my Tutor as "the perfect place to get drunk". Sadly, and despite the predictions of the CUOC graphical oracles, Oxford didn't have a pre-race tipple and proceeded to win the Men's A race by 78 minutes. BUT the Cambridge Women had brilliant runs, locking out the podium and beating Oxford by some 76 minutes - impressive given that one fewer runner's time counts in the women's competition. It was left to the Men's B team to restore the honour of the men of Cambridge, which they duly did - by 109 minutes, no less!

The evening's social activities began with the notorious Boat Race. After last year's defeat at the hands of cheating Oxford, CUOC were determined not to lose again. Despite Oxford having some vastly more experienced and talented drinkers than us, CUOC's months of training paid off with a comfortable victory over Oxford, although the Oxford alumni team, JOK, just edged us to the coveted flying pig trophy. The rest of the evening was devoted to food, drink, chat and spoons.

After a night on a village hall floor, Sunday saw the informal relay. This being an Oxbridge competition, a special 5-leg, 3-runner format had been devised by Ian Webb for teams constructed so that each group of three would be approximately equally successful. I can't actually tell who won from the results, but the main thing is that everyone seemed to have a good time in the sun. After the obligatory team photo, we all headed back to the coach and returned to Cambridge with a couple of trophies, several medals and an impatience for the British University Championships next weekend!

Thank you to JOK, especially Ruth Holmes, for putting on the weekend.