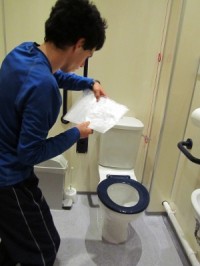 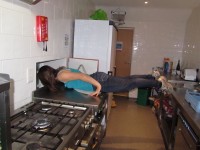 Just in case you were wondering; yes, we did all get back safely. As far as I know. So that's the end of the Tour Blog 2012! Not that we don't all have interesting lives though (Ben's on a foreign mountain somewhere, Dan has skied to the post office, Katrin's about to use her Mathematical Powers to work out how much this whole damn trip cost, and I'm going for a day out in Matlock tomorrow), but you'll have to find out more elsewhere! If you have any comments, please direct them to publicity

And a special prize (more potatoes) was awarded to the planners, Matthew Vokes and Zuzka Strakova. Matthew has now eaten his potato. Raw. Yuck.

The Micro-O is now in full swing. If you haven't done a Micro-O before (and you would have if you went to the CUOC/WAOC Micro-O Champs a few weeks ago!), it's basically indoor orienteering, with controls hidden in all sorts of places. As I write, Ian Cumpstey has just climbed into a cupboard to punch the finish, and Dan Safka is about to run to the kitchen fridge to find the control hidden between two blocks of cheese. James Hoad is currently leading with a time of 07:41, but there's only one (hand-drawn) map so there's a bit of a queue to start. 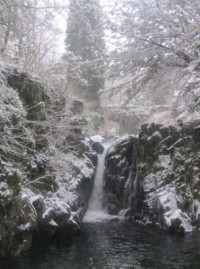 The planned rest day turned into a bit of a washout with heavy snow in the morning which turned to heavy rain an hour or two ago. The annual Very Misguided Run carried on regardless up the Fairfield Horseshoe, a marginally more sensible choice than last year's attempted run up Helvellyn in storm-force winds. The running group only were forced to turn down the only clear valley when visibility reduced to less than a metre just short of the top, conveniently ending up in Wilf's. The walking group on the same route took the same decision! Fortunately I can report that everyone is back and nobody is admitting to having hypothermia. Win. 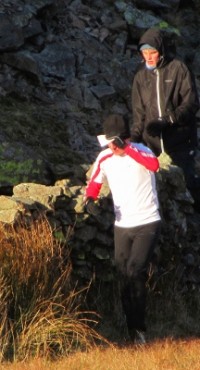 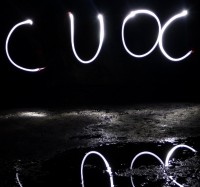 After a being flooded, blown over and generally soaked to the skin just trying to leave the accommodation on Silver How day last year, this year's blue sky and good forecast was a pleasant surprise! All the exercises were carried over from last year, so Adam Bennett's (an ex-captain who is now so far out of Cambridge that he's got a proper job and can't go to training tours anymore) courses practising technique selection formed the morning session. The challenging, steep, intricate terrain required careful route choice, as did successfully navigating the numerous frozen bogs!

In the afternoon Tom Dobra planned a Peg Relay (more accurately an Electrical Insulation Tape Relay, but that doesn't sound so good). The aim was that the fastest runners would pick up one of a limited quantity of additional maps at select controls giving them an extra point or two to find. In theory, everyone should finish at the same time but it's not easy to do! But everyone seemed to cope well with one of the rare opportunities to race directly under pressure in orienteering.