CUOC do a training

Thetford forest has been much maligned by CUOCers over the years. This article will extend that rich heritage. Common descriptions of the forest include "substandard, "sordid", and "soul-destroying". And that's just the PC section of the adjectives listed under "S". Nonetheless, there's sod all else to do, so we went there to get better at the thing that we do. Fortunately, it was a beautiful spring day in East Anglia, sun beaming but not unpleasantly hot, so spirits were high as Luke, Aidan and James set off from the car, which had been parked in the wrong place thanks to the same navigational skills that were about to get savagely exposed.

Luke had planned 4 'short' (this turned out to be a barefaced lie) loops, starting from the furthest possible corner of the forest from where we had parked. This actually wasn't as bad of an idea as it sounds, because it meant we only had to go through the forest one way. Many controls were found, many more were missed, but as is the beauty of flag-free training, several mispunches were left entirely unidentified until the post-training analysis. Most of these disqualifying offences were provided by James, who thought he was orienteering okay, but wasn't. Aidan meanwhile was having a somewhat more competent time of it, although also MP'd at least once, while Luke split the difference in ability, placing him at a solid 4/10. 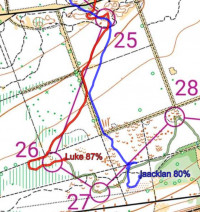 Everyone spent a lot of time faffing around in the vague, vapid white forest, with a few moments' respite in the vile green (that's the "V" section). So much time was lost to mistakes and mispunches that the map apparently got further and further out of date as the training proceeded, with the initial "oh where's that path gone?" developing into more complex cartographical discrepancies, like "oh where's that entire block of forest gone?" and, by then final loop "oh, why is that formerly runnable forest now the arboreal equivalent of a concrete wall?". The indisputable highlight of the map, however, was saved for near the end. A single holly bush of relatively unremarkable stature, but mapped as a distinctive tree, in a clearing, surrounded by a different colour of forest, with a distinctive vegetation boundary around it. Thetfore is bare of features, but that's a whole new level of excitement. On arrival, Aidan expressed his desire to hire that bush's hypeman, while James asked "is this the right place?", and Luke said nothing, because he hadn't caught up yet.

By the end, much knowledge had been acquired by all, although mostly about Aidan's suboptimal nutritional state. Discovering a rather bored housemate back at the car, we made a hasty retreat to the comfort of Cambridge. Unfortunately, though, not before it was insisted upon that photographic documentation be made of the matching, and frankly unacceptable, new CUOC shirts. Such evidence is, against my better judgement, presented adjacently. We're sorry. 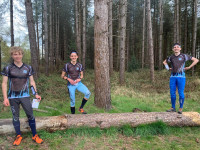