On Friday night CUOCers gathered in locations across Cambridge, piled into cars and began on the journey to Varsity. Cars sped down the M11, cycloned around the M25 and fired off along the M3 to Southampton, finally converging on the Red Funnel Ferry Terminal. Walking inside to eat dinner, they were delighted to encounter a board of flyers for activites we could partake in over the weekend. Faces lit up with glee at the prospect of the Garlic Farm; with free entry, garlic tasting sessions and a garlic museum, it promised to be an exciting weekend. After a while, the boat arrived, and Helen P was very disappointed to see that it didn't have a red funnel. It did, however, do it's job of getting us to the Isle of Wight, so all was well.

At the far end, it was a quick drive from the port to the accommodation, in Calbourne Community Centre, which had all the things a good accommodation should have: hard floors, no hot water and pay-as-you-go heating. We set up camp, and went to bed, excited for the next day's racing.

On Saturday morning we got up at a reasonable time, cooked some porridge, drank some tea, and headed off to the race. A scenic drive brought us across to the eastern end of the island to Ventnor Social Club, who kindly hosted the assembly area and provided a pool table and darts board for some pre-race fun. Oxford were already there when we arrived, except for one member, who slept through his alarm and was left at home. Ben gathered us round a table to explain which bits of the map were the dodgiest, and the starts started soon after.

The terrain was quite nice, beginning with some tricky passages through gorse bushes, with a couple of transport legs before a section on a steep slope with blocks of forest, then a route choice leg across a very steep and slippery hillside. The courses finished up with a routechoice across a ginormous reentrant and a couple more controls in the gorse maze before a super speedy downhill run-in to the finish.

Fiona and Helen did well to take 1st and 2nd on the Women's, while Aidan and Paul were 2nd and 4th on the Mens. James was one silly boi, continuing his Varsity record to make it two mispunches out of two races, and Jeremy proved that he selected the team wrongly by beating some selected team runners. Everyone else packed pretty well, with the women winning, and the men taking a commendable second place in the team competition. 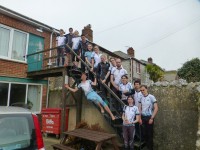 The drive from Ventnor occurred with some trepidation - would the experience live up to the hype? Would David's questions about rusty garlic be answered? Would there be a tasting session? We arrived and boldly strode up to the gates, breathing in the atmostphere. A beautiful sign directed us left to the information centre - a veritable treasure trove of trivia. Here, we learned all about the history of the farm, the history of the island and the history of garlic itself. One of many fascinating facts was: it is hypothesised that garlic was the driving force behind the development of agriculture, with early cultures wanting a more steady source of strong flavours to supplement their hunter-gathered fare.

Soon, we decided we couldn't wait any longer, and had to eat some garlic, but alas, there was no tasting session to be seen, with the room cruelly locked. Nevertheless, we continued around the farm to the shop, where our prayers were answered by a table covered in condiments - garlic mayonnaise, garlic chilli sauce, garlic chutney and more! There was a table of seed garlic, a table of cooking garlic, a table of black garlic and even garlic beer and vodka. There was so much that it was hard to take it all in. We were having fun, so time flew, and soon enough it was time to go, clutching precious purchases to bring home some memories of the joyous occasion. 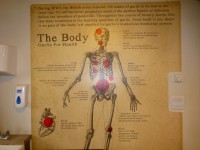 When we arrived back at the hall, the swimmers were also arriving back, and they had also had a nice time.

The shower situation at the hall was not ideal, with two electric showers with no divider, meaning that everyone had to find a shower buddy of the same sex to go in with, and with the number of people to process the going was slow. Eventually everyone was clean and nice, so we headed over to the playpark for the boat race. The CUOC team, as always, was slightly lacking in members, meaning that Rowan had to drink three times, Paul twice, and James, who claimed to not be drinking, decided to drink half a time anyway. OUOC reclaimed the trophy, but only figuratively, as it had been left in its spiritual home in Cambridge.

After that was done we headed to the Sun Inn. Just across the field, where we were promised lots of food and lots of beer. The food was a buffet, with as many vegan options as carnist ones, making a nice change from the standard buffet format. After a while, some live musicians began to play some live music, which Jeremy, Fiona LB and DRONGO danced to while everyone else didn't. Gradually the night progressed and a correlation was found between people drinking and dancing. After about 11 the live music left, and was replaced by dead music from Helen's phone, including the Absolute Certified Banger™ 'You and Me', which the publican thought was very weird. Finally at around ten to tomorrow everyone headed back to the hall for some sleep before a big day of relay racing.

Sunday dawned dim and rainy, which was disappointing after some lovely weather on Saturday, but the weather has never deterred orienteering, so the DRONGOs left to hang controls, while everyone else ate breakfast more leisurely and packed their stuff. This time the race was on Tennyson Down, at the far southwestern tip of the island. We parked at The Needles Landmark Attraction, which wasn't particularly busy for some reason. We marched up to the start, where a tent had been erected precariously on a 50 degree slope, before the first leg runners dekitted and set off.

Today's course was quite different, with lots more gorse, but also more passageways between the bushes. Ben had followed the Cave Rule perfectly, even though it meant that runners had to go down a set of steps into a bunker one at a time, giving a huge advantage to the first one to reach the control. The ground was super fast grassland for the entire way making for some speedy times. A mostly CUOC team of Paul, Emma and Noah Oxford came in first, but results were very tight, with several teams finishing within a very short space of time.

Once everyone was done, controls were collected in the space of about ten minutes, we said goodbye to our sworn enemies/friends/acquaintances from Oxford and went back to the hall to pick up our bags and clean up a bit. During the morning, Jeremy had received word from Red Funnel that our ferry might be cancelled, so we were on a tight schedule to get on the earlier one instead, before Storm Freya left us stranded on a small island with no hope of return. Everyone made it to the terminal with plenty of time to spare, but as we were driving on, disaster struck! Fiona's car wouldn't start, and they couldn't get it jumpstarted in time, leaving her and Emma stranded on a small island, as the boat faded away across the Solent. Luckily, a crisis was averted, with jumpleads being obtained, and the next boat not being cancelled, so everyone could sleep in their own beds on Sunday night.

Well done to everyone who came along and raced, and a massive thank you to Ben Windsor and DRONGO for organising everything. Hopefully everyone had a fun weekend, and is looking forward to next year, where we will be hosted by JOK in some international location yet to be announced.