5 CUOCers travelled to the South West for the British Sprint and Middle Champs. Saturday saw the Sprint Champs taking place at Bath University, which proved to be a good place to host a Sprint Champs, which pleased CUOC. Unusually for a British Sprints, the starts were all on time and everything was very well organised, which pleased CUOC even more. The morning qualification stage largely made use of the accommodation areas to the NW of the University, with a short section across the main parade to give a taste of what was to come in the finals. Fiona, Aidan and James A all successfully got through the qualification stages to reach the elite finals.

The finals criss-crossed the multi-level main university parade several times, giving interesting route choices of level as well as direction. As with the qualifiers, the finish was in the middle of the athletics track directly below the assembly area building. The elite finals were held first, turning them into an interesting spectacle for the rest of the competitors finishing their lunch. Fiona and Aidan both finished an impressive 4th, whilst James A was 11th.

Despite wearing CUOC stash on the [spoiler alert] Middle Champs Podium, which CUOC approves of, the above CUOC athletes ran for their home clubs, which CUOC frowns upon. A battle was therefore fought in the CUOC ranks for the title of â€˜highest placed CUOC athlete running for CUOCâ€™, with a long line up of an ill Rowan and an ill Jeremy competing.

At the Sprint Champs, Rowan took this prestigious award by 2 seconds in the qualification round, although Jeremy and Rowan were competing in two different heats on two similar but non-identical courses. Unfortunately, these 2 seconds meant Rowan made the B final, whilst Jeremy was in the C final, so no actual head-to-head competition could take place. Jeremy went on to take 3rd place in the C final, but this did not make up for the disappointment of his earlier defeat.

In alumni watch, an unusually uninjured Ben Windsor took 13th place in the elite final, almost certainly making him the highest placed person not to use SIAC, whilst Sarah Righetti was the highest placed DRONGO on the womenâ€™s open.

Overnight Rowan chose to stay with the DRONGOs in Street YHA, whilst Jeremyâ€™s and Fionaâ€™s families independently chose to stay in Cheddar YHA, home of the legendary cheese, although disappointingly almost none is actually made there. 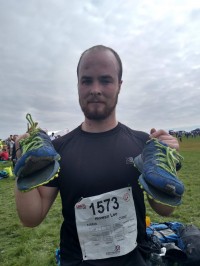 Sunday was the Middle Champs. The Middle Champs only had one course for M21, preventing heats ruining a proper competition for â€˜highest placed CUOC athlete running for CUOCâ€™ and setting up â€œthe match for the agesâ€ (Oscar Wilde, 2019). After some pre-race trash talk about the importance of Rowanâ€™s and DRONGOâ€™s pre-race pancakes, the competition began. Jeremy started first, having a slow but steady race, very much enjoying being in a runnable wood with contours. 10 minutes later Rowan started. He went out fast, not slowing down for anything, including trees. CUOC suspects the area may have to be remapped for the newly created clearings. Eventually one tree fought back, cutting Rowanâ€™s eye, but Rowan did not let this distract him and kept going fast. About halfway around, Rowanâ€™s shoes fell apart, with the soles detaching from the top half of his O shoes, giving him Pac-Man feet. Not letting this stop him, Rowan simply ran on in his socks. However, Rowan was slowed down sufficiently for Jeremy to take the title, although Rowan was still within a few seconds of the fastest run in time.

The woods hosting the Middle Champs â€œStockhill Woods near Wells in Somersetâ€, which proved to be variably skogalicous, if a bit small. Many pits and trenches kept many controls well hidden, although navigation was made easier by a large path network. The smallness of the area meant the planner had to use a double-sided map for the 6km M21 course, although the route rarely went through the same area twice.

The M/W20s class proved to be very successful for CUOC, with Fiona and Aidan both taking 2nd, whilst James Ackland took third.