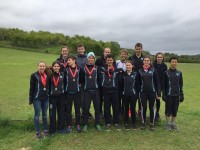 This weekend saw the BUCS Orienteering Championships held by Oxford. After some early suggestions that it might have to be cancelled again because of some unseasonal snow, OUOC pulled through to produce quite a successful weekend of competition.

We started off hiring cars from a different place from usual, and didn't take into account the fact that they wouldn't be as efficient as CCVR, so everyone had to wait for quite a long time before the drivers arrived; however this was counteracted by the sheer size of the cars: three massive behemoths with boots easily big enough for a pop up tent, and four wheel drive to cope with any conditions a parking field could throw at us. For some reason, Jonathan got a normal car though. Maybe Enterprise don't like Scottish people.

After a diesel guzzling ride to Oxford, we arrived at the car park before Oxford did. They soon arrived to start taping the route to the start, so we stayed in the cars chatting. We waited for a while longer before heading up to the start ourselves. Gradually, all the other teams arrived, with one notable exception - there was no sign of EUOC. As the start time drew nearer we grew more worried that they weren't going to turn up, wanting to save face rather than perform badly with a team decimated by TioMila. The start was even pushed back ten minutes, and eventually they came swanning in, happy to make us wait. The teams got ready to run, and we stripped off into the bluest of blue trousers, which drew such wide ranging compliments as 'They're horrible' and 'Those are even worse than ShUOC's white ones!'

Finally we got started, and what a start it was - runners flying out towards the tricky spur-gully terrain of Shotover. Some took it out too fast, and Paul and James K both struggled on the first control, losing large and very large amounts of time respectively. Paul managed to catch back onto the pack, and came back in a solid fourth place, behind the titans of Oxford, Loughborough and Edinburgh. Meanwhile, in the women's race, Fiona ran away from it, handing over to Helen with a huge lead.

On second leg, Helen increased the lead even further, while James A did his job and overtook the OUAFC 5th Team Supporters Club before handing over to Heather and Aidan, who both fought strongly for the entire leg. Aidan came back in third, earning FuCUOCxford some nice pieces of bronze on a ribbon, while Heather did well to hold off EUOC until the very last control, still coming in well for some silvery necklaces for CUOC Kangaroos.

Further down, we had CUOC Crocodiles (Euan, Jonathan, Rowan) 11th and CUOC Kingfishers (Elizabeth, Lily, Emma) 4th. CUOC Camels (James K, Tin and a Durham runner) were sadly let down by a mispunch on their last leg, while CUOC Chameleons (Ana, Isabel, no one) were incomplete so couldn't place.

After we were all done, we headed back to the 'Did you know Roger Bannister went to Oxford?' track for some showers and to set up camp for the night. The men's showers earned a 8/10 for power, and 9/10 for warmth, while the women's didn't, As the previous social was to be Harry Potter themed, Lily produced some Dark Mark temporary tattoos, which helped us to increase our fashion passion by even more than the blue trousers had managed. Euan, however, didn't stop there, getting out his gown and getting fully kitted out in the true spirit of fancy dress.

We headed first to Keble Bar, which was quite strange, but quite nice, where some people purchased 568ml of beer, then headed out onto the lawn for the boat race. Unlike Varsity, we didn't win this one, given the tough competition of ShUOC. After an efficient race, we left quickly before Tim got deaned, and plotted a course for Cosmo. Apparently, you have to eat seven plates of of food to get your money's worth at an all you can eat buffet, and there were some sterling efforts by eveyone, but most only managed three or four. One ex-EUOCer was spotted taking a different approach to value for money, dining only on steak, king prawns and sushi. Of course, there is always room for pudding, and while Paul ate one of every cake, Elizabeth, Lily and Ana shared one of every cake three ways.

When everyone had eaten as much as they physically could, it was time for Spoons, and we departed to the Fork Handles. People stayed for varying lengths of time before heading back for some sleep. Fiona, James and Aidan stayed up to watch TioMila until Aidan's phone ran out of battery, then packed it in and went to bed. James decided that he didn't need to pay his fair share of the cost, as anyone who owns a five foot cast iron stag can clearly afford the 15SEK viewing fee.

We woke up so early on Sunday morning that it was still dark - fortunately someone turned the lights on in the windowless hall so we could get packed up and walk to Sainsbury's in search of breakfast. James A was quite tired, and bought two cold double espressi, which he later described as 'disgusting'. Ana decided her leg was too sore to walk back, so demanded that Lily come pick her up from the shop before setting off to the race.

When we arrived in the parking field it was still a long time before first starts, so we sat in the cars listening to the Approved Playlist and complaining about the weather, until eventually it was time to run. Today's terrain was very green - the courses had been planned for March when there weren't any leaves on the trees, and now in late April there were few sections where you could see for more than 20 metres. The courses themselves were quite devilishly planned, with nested phi loops to break up any packs and seriously confuse everyone who didn't find the terrain tricky enough already.

The result of the day went to Fiona, who came second in the women's, while the fastest CUOC man was Aidan, coming 12th. Everyone else did very well to get round the challenging course in some fairly tricky terrain. After very solid placings yesterday and today, we managed to pull off second team overall - the best ever CUOC team performance! (as far as anyone can remember)

Soon enough, it was time to leave and stop being cold, so we piled into cars for the drive back to flatland, comforted by the prospect of Annual Dinner in the evening. When we got back, everyone had plenty of time to get cleaned up, before meeting at Jesus for an excellent meal. Unfortunately, the normal dress code of Black Tie and CUOC tops had to be abandoned because everyone's CUOC tops were still disgusting, so we all looked much smarter than normal, except for Emma, who very cleverly owns two CUOC tops. Paul, on the other hand, wore high heels, kindly provided by Ana, to prove a point he made a long time ago that he could walk in heels better than Emma. Sadly we forgot to have a race, so there will have to be a repeat at the next CUOC formal. Helen was confused by the starter which she helped to choose, because she didn't think she would ever have chosen something with mayonnaise in it, but the rest of the meal was all very nice. 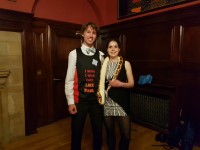 At the end, Paul didn't give a proper speech because he'd been busy all day doing BUCS and isn't very creative, but did give out some nice CUOC hats to the committee (copied exactly from two years ago - thanks Helen and Sam!). Jeremy then presented the captains with a new snake for Helen's neck, and a vest saying 'I wish I was fast like Paul', before Liam brought out the CUOC journals, which were absolutely amazing, despite not being typset in LaTeX!

Eventually everyone started heading home, bringing an end to a successful night to end a successful weekend. Congratulations to everyone who ran BUCS, and thanks for making it such a great couple of days!