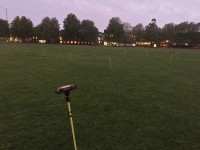 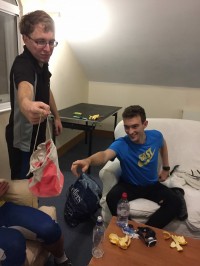 The first training of the year took place at and around Parker's Piece, focusing on the basics such as orienting the map and learning the important symbols. A fun 'maze' (grid) was set up to encourage new and old orienteers to quickly turn the map the right way up, and not get lost among very similar controls! The courses themselves varied in difficulty; with simpler maps that displayed all controls to 'Extremely Hard(!)' maps that displayed two controls at a time, with North at a different orientation for each section! There were also longer courses that involved carefully navigating the surrounding streets, including the Grafton Centre.

Afterwards, pizza took place in Trinity where we found out that the Italian treat was actually invented by Rowan himself! James also demonstrated that one should never stop training, even while socialising.