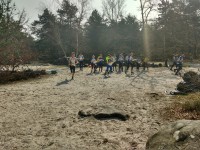 Some people were definitely more alive, alert, awake and enthusiastic than others this morning. However everyone made it out to the relays even if they didn't compete due to being injured or hung over! The addition of croissants and pains au chocolat to the normal breakfast selection may have helped lure people out of their beds.

The relays were not run in the traditional manner as each leg started in a mass start to save time. The winning teams were presented with left over food from the hostel then it was time to start the logistical challenge of working out how to get all members of DRONGO and CUOC home using various modes of transport. This involved Sarah's car taking Dan to a service station just after the airport then heading to the Channel Tunnel and Ben's car going via the airport to drop James off, then picking up Dan and continuing to the ferry. This was unnecessarily complicated as Ben's car had space for Dan from the beginning. Ben did study maths so he can be forgiven for being unable to count. Surprisingly for orienteers it was the navigation to the airport which was the hardest part. Ben kept on missing the turning or going the wrong way and as a result ended up doing loops of the roads around the airport before finally reaching the terminal.

Everyone has enjoyed themselves and despite not winning we are now all much better at navigating around boulders and dancing to 'You and Me'. A group of DRONGOers and CUOC had a last gathering sailing off into the sunset and saying goodbye to the sun for a while.

There will be some photos soon.