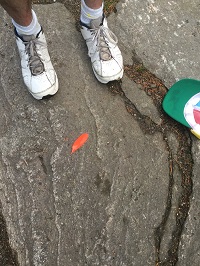 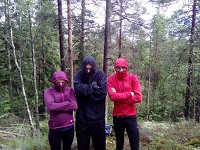 Update from last night - everyone survived the walk, but the Dan hat did not. While taking off a jumper, Dave forgot he was wearing it and it fell off and the propeller broke. However, Jeremy has said he will try to fix it, so that's alright.

Today the training was at Skaran, which is about an hour's walk north of the hut. Paul had planned a few courses around the very south of the area, with some people focusing on attackpoints, and others doing a long legs course, in which 4 legs covered 4.5km. The area was more runnable than on previous days, although still quite rough, but also very boggy in places. Unfortunately there had been a fair bit of unmapped felling, which made one of the long legs quite difficult, but it was still good fun.

The weather stayed dry for the morning and lunch, during which we played catch using Helen. John and Richard collected some morning controls, then left early to get their flight home. Everyone was sad to see them go.

The afternoon activity was a two part exercise for Dave, Liam and Jeremy - the first bit being learning to plan courses, the second practice at hanging them. 'Dave's Spectacular Extravaganza' (hung by Lindsay), 'Jezza's Jolly Jape' and 'Ive's Five Cliff Dives' were well planned courses, and all the controls were in the right place, so obviously the training has been working. While the hangers were out it got wet and cold, so we huddled under a couple of dense trees.

In the evening after we'd all got back we had carbonara, and Paul managed to persuade certain people to watch something other than #Orange is the New Black . After a brief interlude, we had stacks and stacks of waffles, halfway through which Helen decided we needed to do a 2.5 minute plank. So we did, then ate more waffles. Paul produced some final details for tour champs, then everyone went to bed .