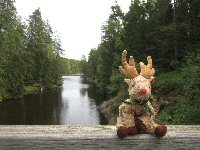 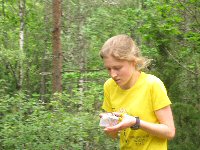 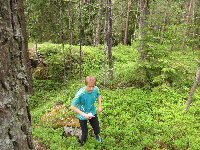 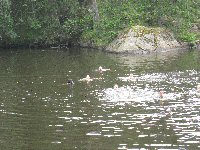 Today was a musical day: CUOC caught the music bug and our marching through the forest was accompanied by tuneful singing and dancing. Or maybe not so tuneful. We were led by the enthusiastic, loud and deliberately out-of-tune Dave, starting in the morning with disney musicals, from Frozen to the Lion King to High School Musical, and moving on to include dancing this afternoon. Some of us were a little too carried away, with Liam being awarded the Dan Hat for managing to fall over whilst dancing to a penguin routine. The brightly colored hat went quite nicely with his turquoise top, so he carried it well. Who will earn the Hat tomorrow...?

This morning Rory and Helen left early to hang controls, with the rest of us emerging from our cosy sleeping bags at the leisurely time of 8.30am. There was plenty of time for consuming the vat of porridge that was prepared in the kitchen for 13 hungry orienteers, and packing our bags for the day ahead, before setting out at around 10.00am. It was a cool and refreshing walk into the forest, and soon warmed up as the shafts of sunlight penetrated through the trees. On our way to the clearing which was to be our base for the morning, the sing-along commenced and whatever wildlife there was had soon run a mile from our terrible singing. Dave, Lindsay and Rory got particularly into it, with some being less impressed. The forest itself was very pretty, the tall conifers forming vertical columns and little Christmas trees scattered in amongst.

The morning routes were across interesting terrain, with lots of hills, knolls and rocky cliff faces. The bouldering and scrambling up rocks made an exciting addition to the orienteering. There was quite a lot of runnable ground, mostly very springy moss (now I see why Moss is so aptly named) which you can bounce across. A few paths criss cross the landscape, some being wide enough to get quite a speed up. There was also the odd Norwegian that we encountered, but none of us knew how to say hello in Norwegian which was a bit of an issue. Lunchtime happened at 1.00pm, or whenever people arrived back from their courses, and we sat on the hill to eat.

For the afternoon we walked to a different area of forest, and Liat demonstrated her pole-dancing skills by an incredible ability to climb trees without any branches. Paul also tried to show off by showing how far down a cliff he can jump, the answer to which is quite far. Helen the Reindeer wanted a go but sadly can't jump quite as far. The afternoon courses were completed in pairs, using the familiar CUOC clock game, which handily collects itself so no one has to go out bringing back the controls afterwards. When that was finished, we went swimming!! Or "schwimmen" as Helen likes to say. There was a very picturesque lake nearby with some low rocks stretching out into the water, and we left our belongings there before taking the plunge. Some quite literally, in the case of Rory's shallow dive, and others taking rather longer to face up to the bracing water. It was a little chilly when first getting in, but quite pleasant. After having a swim to the rocks on the far bank and back, we got out and dried out in the sun before sitting and watching the passing boats. After a while a whole flotilla of boats sailed past, with some very patriotic Norwegians, who seem to enjoy fitting as many of the national flag onto their boats as possible. And also decorate their boats in bits of tree, because apparently the whole forest of trees surrounding the lake isn't quite enough. After much hand waving to the passing boats, we headed back homewards to the cost little wooden huts.

Dinner was a very impressive lasagne followed by apple crumble (thank you very much to the cooks and head chefs for that) and then there was general card games and attempts at completing the orienteering jigsaw, before bed.