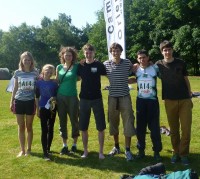 One of the highlights of the end of the academic year - the Harvester relays, were traditionally organised by British Army Orienteering Club and took place safely within a large barbed wired fence.

The relay is not just an ordinary one; it starts at midnight and finishes (for some) in the early hours of the morning. Altogether 7 runners make up a team. CUOC started off on a high note, with Ben Windsor storming out of the dark in 1st place, just 2 seconds in front of the runner-up. Fiona Petersen took over and set out into the forest for her first orienteering race ever! And even in the dark, very brave! In her own words, she thoroughly enjoyed it, as she got to spend some 4 hours in the forest and experienced not only night orienteering but also sunrise orienteering. After a few hesitations for a couple of hours at the start she flew round the rest of the course in an hour! Well done and much admiration for her determination! The rest of the team members mostly set off from mass starts but that didn't lessen their enjoyment. In the end CUOC even managed to beat one team AND we didn't mispunch, which is more than anyone could have hoped for!