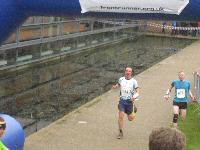 The day started rather drizzle, however sources within DrongO suggested that the weather should improve through out the day.

The CUOC men all started within 10 minutes whereas the women were an hour apart. After finishing, John had just enough time to get the camera from the car and return to the finish to get a picture of Dan finishing. Rory, Dan and John were all fairly pleased with their runs, having run pretty cleanly and losing odd seconds here and there. Shortly afterwards we watched a man on the run-in who didnâ€™t take the corner well, and ended up in the pond. We think more such obstacles would increase the spectator value of orienteering.

CUOC moved to the run-in just in time to see Carrie finish. The elite menâ€™s race ended with a draw for first place. At 16:00 John and Matthew tried to collect their elite maps from enquires only to be told that the start window had been extended to 17:00. After a trip to the download tent, it became apparent that elite maps were not being collected, so they managed to get their maps back. Unfortunately the lack of map collecting didnâ€™t allow the controls to also be collected early.