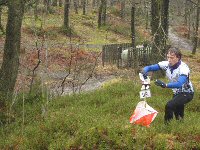 Orienteering is a running-based adventure sport, in which competitors race around a set course, navigating their way with the aid of a specialised map and a compass. A number of controls (checkpoints) are marked on the map which must be visited in order, but it is up to the competitor to choose the best route between them. Typically the race is in a time-trial format with competitors running alone against the clock. At each checkpoint there is a marker flag, and a electronic unit. The runner carries an electronic timing device (dibber/SI/EMIT card) with them and uses this to 'punch' at the unit to prove that they have visited the control. Read on to find out more, or check out British Orienteering's Frequently Asked Questions(pdf document).

Where does it take place? 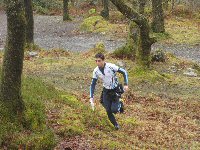 Traditionally orienteering takes place in forest and woodland areas, although races also take place on fell and moorland areas, or even on sand dunes. Small local races can be found on commons and parkland. Some areas, particularly around here, are quite flat, but in other parts of the country you'll find much more climb! Recently urban races have become very popular and they offer a different navigational challenge. CUOC organises the Cambridge City Race every two years.

How long are the courses?

There is a large range of course lengths and difficulties available, which depend both on the type of race and the terrain on which it is run. A beginner might start with an orange or red Colour Coded course between 3 and 6km long, while a long Regional race course might be 9-12km for men, and 7-9km for women. These lengths may sound short if you are used to road or cross-country running, but they are measured in a straight line between controls, which is often not the fastest route, and do not allow for getting lost!

What types of races are there? 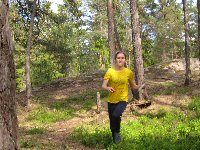 Colour Coded (Level C) are generally small local races with six or seven courses, classified by colours. These range from white (extremely short and trivially easy) through yellow, orange, red, light green, and green to blue or brown (long and hard). Runners of any age can enter whatever course they like on the day.

Regional (Level B) races are larger, and attract competitors from further away. They must usually be entered at least two weeks in advance, online or by post. Courses are again classified by colour, but there is a wider range (normally 12 courses). Each course also has allocated age classes, so that you can compete directly against your peers. The relevant age classes for students are M/W [men/women] 18 (aged 16 or 17 on 1st January), M/W20 (aged 18 or 19) and M/W21 (aged 20 to 33 on 1st January) - this is the longest and hardest class). Maps are printed on waterproof paper.

At the top level, there are several National races a year, which attract competitors from all over the country, and have separate longer and harder "elite" courses for the very best orienteers. At Easter, there is the 'Jan Kjellstrom Festival of Orienteering', a four days of races, and the British Championships are sometime in late spring. Over the summer there is a multiday race in either Scotland, Wales or the Lake District, and there are many similar summer races all around Europe if you're feeling adventurous.

There are also variations on the usual simple course, such as mass-start relays, night races (in case you think navigation is too easy when you can see), score races (at which you have to visit as many controls as you can in a fixed time), Micro-O, mountain bike orienteering, and even Indoor-O. Those who enjoy the longer endurance style races may also run in mountain marathons such as the OMM, Saunders Lakeland Mountain marathon, ROC, Mourne Mountain Marathon etc. which all involve a navigational element.

Do I need lots of special clothes and equipment? 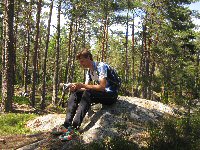 You don't need special clothes to start with, but you will need to wear full leg-cover (trousers rather than shorts). Wear running shoes with good grip. Once you become a regular, you might want to buy some special CUOC orienteering kit, and some hard-wearing O-shoes.

The club have compasses for members to borrow if they don't have their own. If you come to larger races you'll soon get used to seeing the Ultrasport and Compass Point vans, both sell a large range of orienteering kit and equipment.

Going to a race 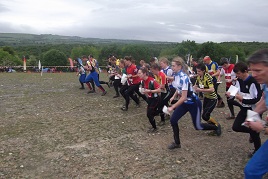 You'll probably start with a Colour Coded race, where you will need to register for your chosen course, usually at a car window or in a pop up tent. You will also need to hire a SI card (dibber). As well as the map, you'll have your dibber and some control descriptions, which tell you what feature each control is on. You need to remember to clear your SI-card (using the clear box) before you start. Having changed and got your compass ready, make your way to the start, leaving plenty of time to watch what everyone else does.

You will be called up a couple of minutes before your start time, and kept waiting in a taped box. A minute before your start time, you will move into the final box, and you will be told where to find your map. With ten seconds to go, you are allowed to step over the front line, and you are started by an electronic bleep. Pick up a map with your course marked on it straight away. At smaller races, you will have to punch a start control (a "punching start"), but at bigger races, your time will be started automatically (a "timed start").

On the way round the course, each control is marked on the ground by an orange and white marker, and has an electronic unit (for electronic punching) at it with which you have to touch with your SI card. Each control is identified by a two or three figure code (given in the control descriptions) so you can't (shouldn't) punch the wrong one by mistake. Once you've visited all of the controls in order there's just the short (usually) sprint to the finish, giving you a chance to show just how fast you really are...

How can I find out more?