Coming straight to you from a very nice youth centre in Rydal, Lake District via a very ropey mobile internet connection!

The notoriously awesome CUOC training tour (Oxford OC's presence grudgingly endured too) is in full swing after two days of training and a race. But the most exciting news, after two years of staying in hovels of various states of repair, this time we have heating, mobile signal and best of all, CLEAN RUNNING WATER! The smell is positively tolerable.

Half the club travelled to the Lakes via a race on an intricate open mountain moorland with plenty of very confusing contours and more climb than we encountered in all the other races of term put together! Despite this baptism of fire, CUOC had some good results and didn't get beaten by the British Squad (who were there for training) by too much. 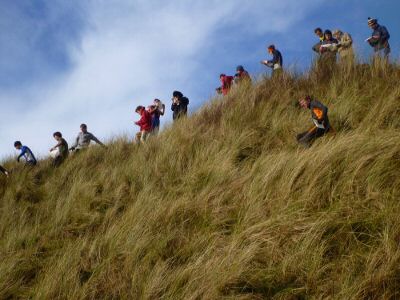 Monday training saw a return to Loughrigg, the area CUOC organised the 2012 BUCS competition on back in March. An array of technique-perfecting exercises blew away the Thetford-induced cobwebs and threw the newbies in at the deep end. They all coped very well though! Meanwhile, Matthew enjoyed buying his provisions for the week in Kendal (2 very full trolleys)... Before an evening trip to the best cafe in the world, Wilf's, we had to say goodbye (temporarily) to Tour Organiser Extraordinaire Katrin, who managed to make the trip happen while being ill. Thanks Katrin and get well soon. Guess who took over? Yes, he's the captain and he knows it.

We took a trip to the seaside on Tuesday for a day of VERY difficult training in the incredibly vague and very much flooded sand dunes of Sandscale Haws, including the deepest "seasonal marsh" ever seen (waist deep). A series of proper exercises in the morning practised navigation and control flow, which was followed by an afternoon game of Snooker (Matthew's special variation on a score race). It took some explaining, but once we'd worked out the rules it was a lot of fun.

Check back for more updates later in the week!