This morning we awoke in reverse order of tiredness, which made a lot more sense. Porridge was made (but not in a pot), reluctance to train was voiced (but not vociferously), and control-hangers left (but not on time) - all in all, it was an only marginally training tour-esque start to the day, and we will have to try harder to live up to expectations on all three fronts tomorrow. Today's training was at Whiteford Burrows, an area whose name does not lend itself to a pun, and is therefore inappropriate for training tour. Nonetheless, it was a quite delightful sand dune area, interspersed with the odd bit of rapid skog, and layered with only the bluntest of Marram Grass. Unfortunately, our esteemed but absent captain had neglected to tell us that she had divested the map of its line features, so the hangers got a bit confused on the way to the start. The non-hangers, led by Aidan, got really confused on the way to the start, so they went and sat on a dune for ten minutes to think about what they had done. For his role in this debacle, Bigby was duly elected Drongo of the Day, and will be provided suitable cranial adornment tomorrow. After morning training, Paul and Aidan, the former big-miles champions of the club, decided that they couldn't hack any more miles, and thus went home DEVASTATED. Everyone else went to do something that definitely, categorically, without doubt was NOT a clock relay, despite bearing more than a passing resemblance. The not-clock-relay was run, and everyone went home.

Upon returning, it was discovered that Aidan had gone to bed, which was a bit wet, whereas Paul had solved the Canada Basin, which was very wet. And as if Aidan hadn't suffered enough already, everyone then spitefully got hungry in an attempt to make sure he couldn't eat at his preferred time, before eventually caving to a dinner of Shroomdogs and mash. This was followed by pancakes, made by the editor with varying degrees of failure. This was "unanimously" attributed to the poor kitchen provisions, rather than James being a useless tosser. With eye on tomorrow's forecast (Wales, without the possibility of parole) various claims were hyperbolised and training plans scaled back. Stay tuned to find out who would win: 9 light-weight floaty orienteers, or one windy boi. 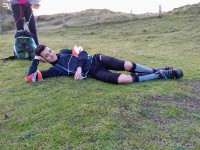