After two days of rather excellent training (see here if you have been unfortunate enough not to have read the previous article) it was time for the real fun to start! Heather and Elizabeth arrived late-ish on Friday night to complete the team, and after a good stretching session and some stupid games with a foam roller and spiky ball, we all headed to bed to prepare mentally for the challenges of tomorrow.

We got up, ate porridge, packed bags, and waited until it was time to go. To avoid clashing with the annual Birnam Hill race, starts had been delayed until after 1230, so we could spend most of the morning leisurely chatting at Iain's house, marvelling at the fact that tiger sharks don't have a height. Eventually it was time to hit the road, so we started driving north.

After a while, we reached Birnam, and were very pleased to see that the Wood was stationary, and very much not marching towards Dunsinane, Satisfied that we would be able to compete without the control sites going for a dander, we got ready to race. The courses were well planned in some fantastic terrain: a big hill with beautiful Scots Pine forest at the top, oakwoods on the slopes below and a tantalising taste of open hill near the start of the race. There were some great results all round, with Fiona winning the women's, Helen 4th, Paul and Aidan 8th and 9th in the Men's. Heather completed the scoring Women's team in 15th, Emma had an excellent run to take 19th, and Elizabeth came in 29th. In the Men's, James was sadly stricken by two dodgy knees to limp round in 38th, while Jonathan, Rowan and Jeremy packed in at 53rd, 65th and 70th. 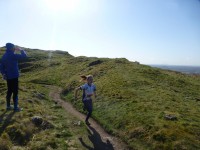 When everyone arrived back, we set off south again for Edinburgh, where it was a quick turnaround at the hostel before leaving again for the social. This year's theme was Farm Animals, so we all channeled our inner cows, complete with splodges, tails and horns. Aidan had along a yak bell that Mr and Mrs Bigby had brought back from the Himalayas, and James had some rather less impressive cowbells. We also had a guest appearance from a certain Iain Davies, who had elected to spend the day running a 800m along something that he called a 'track', which we assume didn't mean any of the tracks we found in the forest earlier. The meal was in the Edinburgh Students Union, and was a pretty good buffet with almost equal varieties of suffer-full and suffer-free food, which pleased our resident vegans.

After the meal, we spent the next hour preparing for the Boat Race, which was an impressive feat of disorganisation. First we lined up in the dining room, then we lined up upstairs on a balcony. Next, we lined up in the dining room, and then we lined up in the bar downstairs. Eventually we got started, and needless to say, ShUOC took the victory, with CUOC languishing several places behind. Some people headed back to the hostel then, and the rest moved across the square to a very empty club playing not not-great music. Sadly, Crooked Iain was denied entry for scheming to help a certain Oxford Cross country captain into the club after he'd been turned away for tripping on a fence. Instead, they went to Revs and then back to the hostel soon after. For the rest of us, the club gradually filled up, but the music didn't change much, and most people left by about Bedtime +3.

The next morning, we awoke to the surprise that the hostel kitchen wasn't going to open until after we had to leave, so we quickly decamped and drove over to the Ackland Residence, where James treated us to luxuries such as porridge and tea, and even allowed us to use his cutlery! Only 15 minutes after we intended to leave, we were out the door and on our way up the road again. 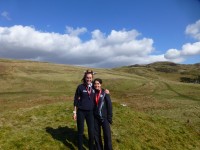 We got to the parking at Stirling University and began the long and treacherous ascent up the slopes of Dumyat, spurred on by the promise of a portaloo at the top. After many long minutes, we were greeted by bad news - a bifurcation of the path, one fork leading to the loos and the other to the start. Luckily, there was time to spare and it was possible to both perform one's ablutions and make it to the start on time. The relays started soon after we arrived, with some speedy racing over the top of the hill, and a short loop after the spectator control in the woods below. There were some more good performances today, with Fiona, Heather and Helen coming 3rd, and Paul, James and Aidan 7th. The Men's second team of Jeremy, Jonathan and Rowan overcame Jeremy's malfunctioning legs to take 19th, and the Women's second team of Elizabeth, Iain and Emma unfairly being denied their rightful spot in 8th because apparently Iain isn't a woman.

Once it was all done, we walk back down the hill to the cars, said our goodbyes and, with heavy hearts, returned to the South. Aidan and Paul had a race back to Paul's house, with Aidan taking the train, and Paul driving. In the end, the results were very close, with the automobile just taking the win by about ten minutes.

Well done to everyone who came and raced this weekend - there were some brilliant results all round, promising good things for the rest of the year's races. Now all that remains is to begin the slow burn of hype for BUCS 2020!