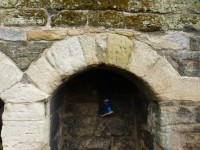 This weekend sees the British University Championships in sOrienteering take place, with the individual at Birnam Hill on Saturday, and the relays on Dumyat on Sunday. Because Scotland is a really long way away, we decided to add on a couple of daysâ€™ training at the start. This is the story of that training.

Once upon a time (1013 on Wednesday morning, to be exact), Jeremy picked up a car from Enterprise Cambridge, and embarked upon a circuit of Cambridge, picking up Paul, Helen, Helenâ€™s human-sized bag, and Emma. They sped away down the road, and soon arrived at Waitrose in Newark, where Rowan was waiting for us. After some boot-repacking and a small amount of food-purchasing, we went for a walk along the river and around the castle, even getting to view an exciting exhibition about the â€˜much malignedâ€™ King John. We then returned to the car, and continued on our way. 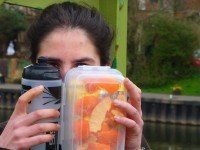 After another section of driving, we arrived at Helenâ€™s house, where her bag disembarked. Fresh from a trip to Sweden, Helenâ€™s mum had been inspired by the local cuisine and produced some excellent vegan cinnamon rolls, among other delicious baked goods for our consumption. John thought they would be better if they werenâ€™t vegan, but didnâ€™t seem to mind too much as he ate three. 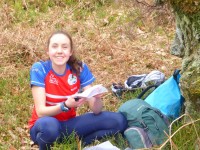 After another long section of driving, we arrived at Lockerbie Tesco, where several quiches and some peas were quickly bought for dinner, before continuing on our way, eventually arriving at Iainâ€™s house in Dunblane at about a quarter to bedtime. Fiona and James had already arrived, after having the good sense to take the train and live in Edinburgh respectively. After a small amount of tea, we headed to bed for dreams of yummy skog.

In the morning, we got up, had porridge, and headed off to the shores of Loch Katrine for some tasty training in the notoriously tough Trossachs. Fiona had planned some nice courses, of which we only tried three, because the long legs course seemed a bit long. The rest were very lovely, and everyone had lots of fun. When they were done, we headed down the hill again, then had lunch on a bench at the end of the Loch, with the picturesque vista of a steamboat in front of us, serenaded by faint bagpipe music from a speaker across the bay. 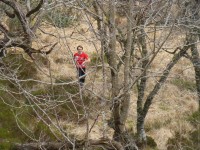 Meanwhile, James had been attempting to hang controls in the other half of the area, but sadly failed on two of them because he couldnâ€™t find them, and five of them because his knee was too sore. Hopefully itâ€™s better by the time heâ€™s got to race. We climbed slowly up the hill, worked out a handicapped order in which to start, and threw some sticks at other sticks.

The afternoonâ€™s activity was a spiral course, going twice round the hill anticyclonically from the top to near the bottom, which meant that there wasnâ€™t too much climb, which was quite nice. There was less debate about correct control placement than normal, because most of the controls hadnâ€™t been hung.

When we were done with that, we headed back to Iainâ€™s. On the way, James, Fiona and Paul got stuck behind a Very Slow Driver, which was annoying, but provided entertainment for most of the way. After overshooting the house accidentally on purpose, they went to Tesco, where Fiona went in, while James and Paul pulled a hilarious prank â€“ moving the car to the other side of the car park. However, the wiley Fiona saw through this clever ruse; upon exiting the shop, she immediately noticed that something was afoot, and decided it was a better idea to just walk home. After fifteen minutes or so, James and Paul eventually returned home crestfallen and admitted defeat, before having some tea and biscuits. 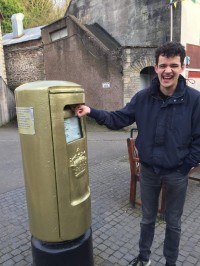 While James hadnâ€™t been not hanging controls, he had been writing a nice book as a present for his grandparents on their 60th wedding anniversary (Congratulations Mr and Mrs Ackland!), and according to the younger Mr Ackland, it needed to be posted by today to reach them in time. As such, we set out on a quest across Dunblane to find the post office to buy some stamps. Once James had posted his parcel, we walked on, seeing the Museum (run by Iainâ€™s Nan, but closed), the Cathedral (closed) and the Andy Murray Golden Postbox, where James pretended to post his letter. We also went to Coop to buy some vegan biscuits, and Helen found a local newspaper with the thought-provoking headline: 'It has to be Beige!' - advertising the disappointing decision by Scotrail to offer the citizens of Dunblane a choice of colour for their newly repainted bridge, but with the only options being 'oyster white', 'light ivory', 'ivory' and 'cream'. 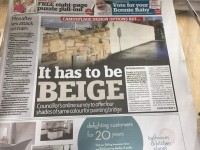 When we got back Fiona and Helen made dinner, while James stirred the pot, Paul made some vegetable cake, and everyone else worked. We had dinner, which was less spicy than expected given the volume of chilli, and very tasty. Next, we had cake and tea, before some people began a jigsaw puzzle and Jeremy and Fiona did some secret captain stuff before bed.

The next morning, we all got up and had breakfast, before heading off to the Very Reverand Lord Majesty Sir William Wallace Official National Park Monument, for a morning of quiet contemplation and wonder at how His Holiness saved us all from the dastardly English. Once our prayers were complete, we did some orienteering on the surrounding Abbey Craig area, which was very nice; much more runnable than yesterday, but the scale of 1:4000 meant it was steeper than it looked, and easy to overrun. There were several courses, imaginatively labelled 1,2,3 and 4, which Emma described as 'garlicky'.

Once that was done, we went back down the hill and drove to Bridge of Allan to have lunch beside the Bridge and overlooking the Allan, where we met a very nice doggo, which Paul rated 9/10, but James decided didn't pass the height test, and therefore could only achieve 5/10. Next, we went to get icecream and sorbet, before heading back to the cars and going home for more tea, more biscuits, and more jigsaw puzzling. Several boring people decided that it was time to do some work. 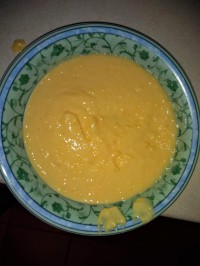 Eventually Jeremy and Jonathan began to make the dinner, with assistance from other people, while Fiona and Helen made some apple crumble for pudding. When the veggie chilli was ready we ate it, and it was tasty. Once Rowan had finished his thirds, Jezza attempted to make custard. He mixed the powder and the milk and started whisking. The sauce developed, taking on a delightful canary yellow (#FFFF99) hue, and an excellent creamy consistency. Jezza kept whisking. The colour developed, progressing through Unmellow Yellow (#FFFF66) all the way to Gold (#FFD700). At the same time, the smooth and nice texture was altered, getting stiffer and stiffer with every whisk of Jeremy's hand. Finally, it was done; to the unwitting observer, a saucepan full of yellow jelly. Jezza triumphantly proclaimed it to be finished, and our hearts sank as we realised we were to be subjected to poor quality condiment. As the rest of the club sadly tucked in to their sadness-sauce, Fiona and Paul smugly helped themselves to the cruelty-free alternative, which provided a delicious and nutritious alternative the tears of mother cows and hens (Jezza would like to point out no eggs were used in his custard either, and questions Paul's credentials to critic his custard after many rudimentary errors in describing the fine art of custard making). After everyone had finished their first servings, Jezza brought the custard back through, to find that it had further evolved into a new form. Now best described as playdough, our esteemed Captain attempted to salvage his honour by claiming he could fix it by whisking even more. Needless to say, no one believed him.