Today was the last day of training which made everyone sad. However, it was at Holme Fell, which was pretty tasty, so that made up for it. When the hangers went to car to leave, they discovered that Tom had left the passenger window open all night, which had the exciting effect that Paul actually got drier over the course of the training day, rather than wetter. 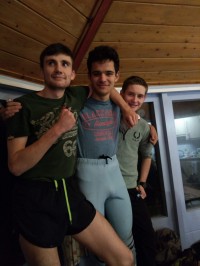 On the drive over, all the drivers decided to take an interesting non-road route, involving a progressively narrower and steeper lane culminating in an section that was 'rocky, really rocky, really more crag than path'. Aidan's plucky little panda was the bravest of all, but even it had to turn back before it reached the quarry section. For this valiant effort Aidan was awarded DRONGO of the day, for the second day in a row.

Once everyone arrived, we headed up to the start and Aidan's dad (proud owner of a cast iron stag) arrived, followed by Elizabeth's dad. The courses took in some skogalicious skog and some felltastic fell, some of the nicest terrain we've had all week. For the first time all week we used the tent, much to the annoyance of the weather gods who decided to try to blow it down. However, pegs, rocks and bags prevailed and it stayed standing.

After lunch, Helen had planned a middle distance course which we decided not to hang, but some people ran without kites while others collected controls. Jeremy left early to take Fiona and Cecilie to catch a train from the Lakeland Kitchen Supplies Shop, and everyone else went back home for tea and biscuits.

Dinner was prepared out of lots of leftovers, and then John arrived, after failing to have a cheeky orange juice with his colleagues. While pudding was being cooked the Micro Championships happened, with SI timing and coloured pen punching. Matthew was the fastest, and James was disqualified for moving one of the controls and sabotaging everyone else's races. 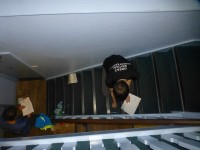 Pudding was cake made in a similar way to the first night, and when that was finished some more cake was made until all the eggs were gone, then some flapjacks were produced until all the unnecessary oats were gone.

The controls were collected in a haphazard way, but eventually all were found. John attempted to shoot some DRONGO and it turned out he was quite good at it. Well done John.