Today was the rest day, meaning according to tradition we split up into several groups to do various levels of stupid runs. One group went for a nice walk, another group went for a fell run, Aidan went for a run round Derwent Water and Rob ran away. Each group presents their own tour report below:

Fiona, Cecilie, Jeremy and Helen planned a nice horseshoe run around Cat Bells and Dale Head for the rest day (Cecilie having just arrived and already taking a "rest day"). Upon reaching the ridge it became apparent that it wasn't going to be a "nice" run up Dale Head, as the strong wind and heavy rain were both going down Dale Head (although one could describe it as exhilarating and refreshing), so, after watching Rob and his hot-hot-hot chilli shorts venture into the cloud, they dropped off the ridge out of the wind to Grange and returned along Derwent Water, picking up a wild Tom Dobra along the way. Fiona and Cecilie had an adventure on some submerged paths ("is that the path? No it's got swans in it") and still somehow ran the 16km distance they had originally planned, and Jeremy returned looking very groovy having consumed multiple groovy bars.

Aidan's ankle was somewhat sore so as any sensible injured person would do he decided to go for a long run. The start was largely uninteresting apart from this odd Irishman who may be called Peter, Pruz-dog, or Pauline who followed Aidan for around 3.5km. Aidan rounded castle crag and was then rudely sprayed by a large truck on the road back to Keswick. A slightly wetter Aidan decided his ankle was feeling good so he ran up to Lodore then on to Walla crag. Apart from sliding about 3m while on his one good foot he found his way to Keswick largely unscathed. After running through the town centre Aidan then decided to follow signs to the lake, he ran through a very dull looking camping and caravaning site then over to the lake. After about 300m of running round said lake Aidan realised he was now circling it clockwise as opposed to anticlockwise (an offence later earning him Drongo of the Day). He then ran back through part of the camping and caravaning park, decided it was still wrong, then promptly ran back though said camping and caravaning park. After the shame of saying hello to the same dog walking couple three times he ran on round to Portinscale. While trying to return via the Cumbrian way he became trapped in a lotus eaters style cafe complex that tricked unsuspecting walkers/and a certain runner off the Cumbrian way and then trapped them in a inescapable labyrinth of coffee shops and walled gardens. Fighting his way out of this terrible evil complex Aidan returned to only be made fun of by the rest of CUOC for his somewhat wiggly Garmin trace.

Meanwhile James decided to go for a bit of a fell run with Rob, but not a full fell run, because that would be really silly (see Waddy et al.). Starting up Catbells, he was damply reminded that fell running involved rain and also wind, which were determined to be Bad Things for an unwaterproofed and lightweight runner. In a bid to not become one floaty boi, James bailed out to the valley, which was less wet and less windy. Unfortunately, as a specialist orienteer, the OS map was of no use, leading to what would have made a Rigby(TM) Wiggly Garmin Trace, if it weren't for the fact that the Garmin had been left at home. This lack of Garmin data calls for a reminder of the rule 'Strava or it didn't happen', and as such this run will join all the rest of James' training for the last six months in the dustbin of doubt.

Rob went for a full fell run, which might have been a little silly. Starting with James up Catbells, then onto Dale Head, Robinson, and Crag Hill. He got a wee chilly with the wind across Littledale Edge, so had to cover his chilli shorts. Around Wandope Rob nearly learned to fly with a strong gust, so he decided to eat his last bit of food remaining - an apple from Apple and Pear Lady from the Sunday market at Cambridge - before trying to navigate home with a dissolved map.

Rebecca and Elizabeth went for a walk up Cat Bells. It was very wet and windy on top so they decided to walk back along the side of the lake. Rebecca can't remember whether or not she saw any sheep, but what we do know for sure is that they did see many deer. They returned to the bunkhouse triumphant with four still-alive trophy stags slung over their shoulders, which they invited in for tea and cake. However, the stags declined, saying they had more important appointments to keep at the Pencil Museum in Keswick. Rebecca and Elizabeth were crestfallen, and expressed their sorrow to the world in the form of interpretive dance, which scored 11/10. All in all, an excellent day was had.

Rowan and Niki, being the only two orienteers with a dictionary containing the word 'rest', remained in the cottage to ensure that the biscuit population was adequately culled before it reached the point of no return. Once the biscuits were reduced to only those most evolved to be less appealing, their attention turned to cards in a futile attempt to pass the time. A search for two player card games proved fruitless; a few rounds of Rummy were played before the main event - two-player solitaire. This majestic game retains all the most prominent attributes of the original version - mindlessly moving cards around with very little thought. The main difference is that, despite the rules stating that one player can win, everyone playing will always lose by virtue of being involved. Paul's return from his first run saved the day, allowing a greater breadth of suitable games to be played, with Golf being the main piece. After this point, Rowan decided the day had been far too eventful and tiring, retiring to his bed to lay staring at the ceiling in the dark. Once thoughts of food danced in his head, he arose to seek sufficiently superfluous Irishmen (<- this is a too perfect auto-correction from 'norishment (sic)'). 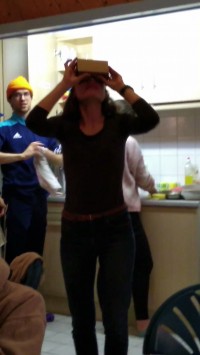 In the evening some people went to a WCOC NightO ewent at Rannerdale. There weren't quite enough seats in the cars driving over so Paul left early to take the direct route through the mountains which was very scenic and very dark. However, he took too long, arriving a full two minutes after the cars.

The NightO itself was fun, quite short and relatively easy (for NightO). It was on a bit of nice, dryish open fell with quite a lot of crags and bracken. Matthew was the fastest getting round in 25 mins, although he did have the advantage of having planned an ewent there last year. Ben was next followed by Paul. Cecile was the fastest woman in a time of 'a little bit faster than Fiona'. After that Ben decided to run home, even though there was extra space in Matthew's car.

Meanwhile, everyone else had been busy cooking Christmas Dinner, featuring no turkey and lots of sausages. It was ready at the impressively early time of 2115 and got gobbled up eagerly. For pudding we sensibly had Christmas Pudding, which also disappeared fast.

We finished off a good rest day with a VR DRONGO shooting competition, with several people recording some impressive times in the first round and some people recording infinite time before deciding it was getting late and round two should be continued tomorrow.