Today's training area was Haverthwaite, which was 'like any good forest that ends with 'thwaite''. However, it was quite far south, so we decided to leave half an hour early. The hangers got up at a sensible time, and left only 8 minutes late due to an abundance of ice on the windscreen. The drive over was beautiful, with copious quantiies of mountain and mist, and some acceptable tunes to accompany the view. They arrived at the train station where the parking was, before heading up the hill to put out some kites.

Meanwhile, the non-hangers didn't get up on time, and left almost as late as yesterday, which gave the hangers plenty of time to admire the view from the top of Haverthwaite and cool down. On the way over, one car diverted via Great Tower to attempt to retrieve Iain's shoe, with the help of John's 20m drain rod. They shoved the rod down the pipe which dislodged the shoe and made the problem worse, then tried to pull it back upstream using a log on a rope. In a last ditch attempt, they tried to surge the pipe with water from a bucket, but alas, it was not to be, and Iain spent the day running in one fell shoe and one road shoe.

When they finally arrived, Aidan explained his courses, which had long legs, and Jonathan explained his courses, which had brown maps, before we set out to do some training. Soon enough, multiple issues emerged with the control hanging. Paul incorrectly identified the centre of the circle and hung a kite on the wrong crag, Aidan didn't read his descriptions and hung a kite on a crag instead of a hill, and no one hung number 35. Luckily everything was fixed soon enough. 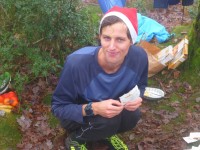 There was initially some confusion over whether we were allowed in part of the area, because the Hawkshead people hadn't been allowed in at the weekend due to archery, so we were slightly worried we might get shot. Happily, we didn't get shot, and there was some terrifically tasty terrain in that section and it allowed for a good long leg across the length of the area, so it was good to get the chance to run on it. 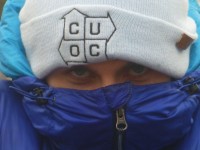 Once everyone was done, collectors were dispatched and everyone else left. On the walk down, one carsworth of people met a very lost James, who wished to trade his too difficult contour only map for a high quality full colour version. Aidan agreed to this exchange, on the condition that James could be abused for getting lost.

Once all the non-collectors were half way back, Jeremy discovered that he still had the key to the bunkhouse, which we all agreed was A Bad Thing, meaning everyone had a long tealess wait in the bunkhouse carpark until the collectors returned. In lieu of tea and cake, some people desperately substituted carrots and Kendal mintcake to avert starvation. When they did get here, we found a 'we missed you' notice from a DHL delivery of a VR headset that Ben had ordered so people could play the DRONGO shooting game. Hopefully they'll come back sometime we're in. 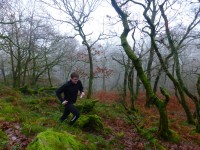 After dinner was polished off we headed to the sitting room for the 4th annual Sinterklaas Poetry Slam. Outfits were gifted and poems were read, including a Mortlockised version of Jabberwocky for the second year in a row, a pair of 'computer/human generated with human/computer help' poems based on Rowan's hobbies, and a confession from Hamilton that 'NARPy map activities' are way better than running after all. The pink and orange pyjamas made a comeback for the fourth year, and Rob modelled them beautifully while reading a poem written in Devon dialect, and as always the trend of men in dresses continued, with some wonderfully flouncy pieces being provided, perfect for tomorrow nights undergrowth infused forest. All too soon however, it had to draw to a close, and the club retired to bed to dream sweet dreams of skog and rain.