Every year, as the summer holidays draw to a close and we prepare to head back for another year of work, CUOC begins the annual migration across the Irish Sea for the Mourne Mountain Marathon, a two-day test of endurance, mountain navigation, and how many people can fit the the PruÅ¾ina house. For the third year running, we saw a healthy increase in the number of CUOC/DRONGO teams, and there are no signs of the growth slowing down. This year's contingent consisted of Helen P and Fiona P, Lily and Elizabeth, Jeremy and John, and Paul with Phil infiltrating from LUOC. Rona from Edinburgh considered running the event, but then realised she would prefer to look after Max the dog, so came to help out instead. 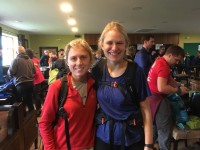 People arrived on Thursday night and at two-hour intervals throughout Friday. After Paul had picked up Elizabeth and Lily, they found themselves with nothing to do before getting Jeremy, but not enough time to go home, so went for a walk up a hill, before doing a speed-run on Belfast IKEA in 11:04. When everyone arrived and had had dinner, a frenzy of packing began, sorting out kit and cutting down on the grams left right and centre. Paul had discovered that chocolate rice cakes gave the most calories per weight of all the snacks in SuperValu, so decided to subsist solely of these, combined with fruit and nut mix, for two days on the hill, while Phil had a craving for chocolate peanuts, and required a special trip to a far-away shop, as all the shops in Comber were out of stock. 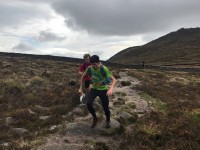 On Saturday morning we got up dark and early and headed down to the event centre at Attical GAC where we were kit-checked before travelling to the start on a very old, dodgy bus where the speedometer and rev-counter didn't work, and not even the driver had a seatbelt, but it was ok because he went really slowly. When we arrived everyone started quite close together and we headed out onto the mountain. The first day's courses stayed in the Eastern Mournes, which are steep and dry(ish), with lots of areas of good running, and a decent number of paths. After a misty start to the morning to fog seemed to lift just in time for climbing each mountain, and the conditions were excellent for running. There were some interesting route choices, especially around the cluster controls, and everyone had fun, before arriving at the campsite at the Happy Valley on the northern side of the mountains.

We all set up our tents and gradually had several rounds of dinner over the course of the afternoon, including a blackberry picking session, where Rona got very excited to feed berries to Max. Eventually it got dark, so we went to bed. However, the weather decided that it wasn't bedtime yet, sending some extremely heavy winds to keep us awake for several more hours before finally dying down. 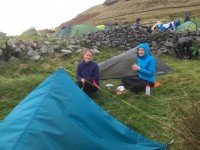 In the morning we were awoken by the sultry tones of 'The Mountains of Mourne' sung by an organiser,and rose from the tents to absolute carnage. The winds had done their damage during the night, and several teams had been forced to abandon the mangled wreckage of their flimsy ultralight tents and head for the marquee, which itself had taken a battering, with a 5cm stake snapping in half. Luckily, we had all arrived early back after the first day, and managed to snag the most sheltered spots, in a hollow by the hedge, and all our tents lived to tell the tale. 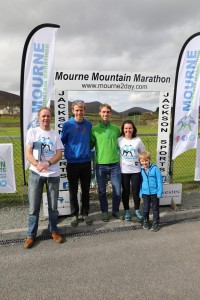 After eating breakfast and decamping, we went off to start the second day. This time, the courses headed back through the Wild Western Mournes, a vast expanse of tussocks, peat hags and turf cuttings, where paths and short heather are like gold-dust. The courses again were good, giving some more challenging choices and a fun cluster with four controls all around the summit of Hen Mountain. The final run in to the finish was 1-2k (depending on course) along a slightly downhill tarmac road, which seemed to go on forever, but eventually ended with showers and soup, which were wonderful.

In the results, Paul and Phil won the Elite Class, John and Jeremy were 6th on the B, Lily and Elizabeth 19th (4th female) on the C, and Helen and Fiona won the D. Full results are here.

After it was all over, we headed back for an evening of pizza and dealing with kit, before everyone headed home on Monday. Well done to everyone who competed, and here's to even more CUOC teams next year!