It was warm in Cambridge. It was therefore decided to hold circuits outside on Jesus Green. With James retired as training officer to focus on preparations for his sub three-hour attempt on the Manchester Marathon (you can donate here), CUOC Captain Helen kindly volunteered to run the session. Unfortunately the session was not so kind, with some labelling it the toughest circuits session in CUOCs brief circuits history, due to it having two minutes worth of both press ups and burpees, no motivational tunes and no rest breaks. Whilst all those who attended were very grateful for the pre-JK gainz, a motion has been tabled for the AGM to prevent future occurrences of this in case CUOC is mistaken for the GB squad.

At this point Paul gained the tittle of third most boring CUOC Captain, by choosing to host the Hare and Hounds Bored Games Club rather than go to nosh. This is unheard of, as while these meets may have tea, coffee, and biscuits, they certainly don't have MicrO, potatoes, or an end. CUOCâ€™s Health and Safety officer has been notified, in case an intervention is needed before anything more serious occurs, like Paul attending an EAOA meeting. Paulâ€™s older sister currently holds second place in these rankings.# 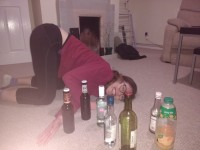 As Ben, Dan and Zuzka were busy in the process of packing to leave their house the next morning, it was agreed that nosh would be at their house and cooked by CUOC members. It was proposed that the meal could then be leftovers from their fridge. However, as leftovers consisted of three sweet potatoes, four onions and some lemon juice, some inventive thinking and a shopping trip was required to produce a meal. Eventually salmon was chosen, as Ben liked it. In return for doing the cooking, Jezza and Lindsay then helped use up some of the leftover alcohol.

Whilst dinner was cooking, CUOCers went through the large pile of things the DRONGOs were throwing out. Nobody felt they could rescue the portrait of two people who looked a bit like Ben and Zuzka, as that would have been weird. Lindsay and Helen both fell for Dan's life-size cuddly penguin toy. Lindsay worked out she could transport this back to Cambridge half sticking out of her panniers, leading to a very entertaining cycle home. 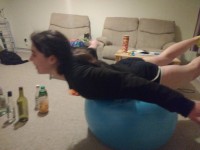 Lindsay and Helen then went through the large pile of clothes Zuzka was throwing out to see if they could rescue any of it. Helen found a tiger onesie for her sister (although this may have been a surprise, so don't tell her), while Lindsay had much fun trying to work out how to wear a Chinese bikini. Feeling left out, Jeremy bagged himself a vintage Ben Windsor branded CUOC jacket that Ben no longer wanted.

Unfortunately Ben and Dan had already given their dining table away, so dinner was eaten on the floor. In attempt to have a theme for the meal, Jezza successfully provided reduced Sainsbury's satsumas and reduced Sainsburyâ€™s Coffee and Walnut cake to go with the reduced Sainsbury's salmon. Even more impressively, Dan managed to tell us stories we hadn't heard before, making for a very pleasant dinner. 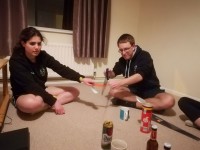 After dinner CUOC held an impromptu yoga session whilst the DRONGOs tried to finish packing. Lindsay did a very good job of demonstrated the Had a Really Good Night Out Pose, aided by a few empty bottles. Helen then attempted to fly. This involved supermanning on Zuzka's exercise ball she was supposed to be deflating, whilst Dan fanned her with Zuzka's hand fan that he was supposed to be packing. CUOC advises that wind tunnels are more effective.

Jezza had been very happy earlier in the evening when he discovered Ben had got the saw out in case it was needed to help pack. Unfortunately Jezza then wasn't allowed to help dissemble Dan's desk, deflate Zuzka's exercise ball or cut the cake. He eventually found a use for the saw cutting the oranges' netting in half, although this may not have aided the packing effort.

When all was packed everyone attempted to finish off the beer and the chocolates CUOC bought Ben as a leaving gift. The CUOCers and penguin then cycled home.