This week it snowed which was both good and bad. The positives of snow are that Wednesday training can be replaced by the SnowO (see previous report for more details), fun can be had spent playing in the snow, and Cam looks very pretty covered in white. Snow is however bad when it means that BUCS is cancelled. To make matters worse, we celebrated for a whole 5 hours after we were told the weekend would go ahead. But this was not to last, and our hopes and dreams were crushed. Fingers crossed the race will be rearranged so we still have a chance to show off our amazing Death Eater costumes.

However, not to let a good weekend go to waste (and because we were now stuck with 3 hire cars that we couldn't return), we decided to have a CUOC fun-filled weekend extravaganza. After filling out Helen's extensive poll, various activities for the weekend were decided.

The first of the activities on the agenda was to go on a sledging trip to Gog Magog, one of the only hills in Cambridge. When we arrived, we realised our idea wasn't so original as the hill was full of kids sledging down. As it rarely snows in England, and the last thing people think to pack when they come to Uni is a sled, we had to improvise. First, we tried bin bags which failed because most of the snow had melted which did not yield a smooth enough surface. Dan decided to try out his take on extreme ironing by bringing his ironing board along. Everyone watched on in anticipation, including some kids nearby who claimed, "they had to see this". Dan got off to a good start and moved a whole inch until he came to an abrupt halt. CUOC suggests that extreme sports should be left to the experts to avoid future embarrassment. 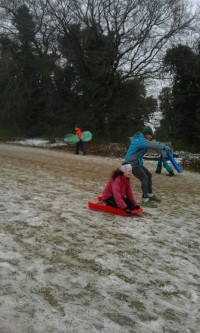 Determined not to have a wasted journey, we frantically searched the hill for ideas on how we could sledge down it. We soon came across a broken sledge which the owners said we could have as long as we recycled it afterwards. This seemed like a good deal, so we accepted. The sledge proved to be an efficient method of reaching the bottom of the hill fast. However, there were many challenges to face including steering to avoid small children and dogs, and stopping just in time to avoid falling down the ditch at the bottom. Jeremy tried to take a snowboarding approach and went down the hill on the sledge standing up. He fell off and we laughed a lot.

The snow was melting fast and soon the hill became very muddy and no longer fun to sledge down. So we decided to head back to the cars, stopping by the igloo on the way. Some children had caved the roof in so Jonathan and Dan both took turns standing in the igloo as everyone threw snowballs at them. It was like a weird version of Whac-a-mole.

The next activity of the day was a Pilates session led by Elizabeth. This was probably the most popular Pilates we have had this term with a huge turnout of 6 CUOC and 3 DRONGO members. Let’s keep this up! Emma was particularly happy with the session as she got to do her favourite exercise: the egg roll.

The Pilates gang then headed over to Jeremy’s house and began preparing the veggie chilli for dinner. We were soon joined by Paul and his saucepan, which he brought along because Dan forgot to bring his. After lots of veg chopping, cheese grating and rice boiling, our dinner was made. This was followed by a delicious homemade apple cake where slice sizes were requested in terms of radians.

The final activity of CUOC’s big weekend of fun was a local race at Aspley Heath on Sunday. We tried but failed to convince Paul to come along as he was too ill. He even declined the suggestion of running the white course which he said would be insulting. We also tried but failed to convince Helen to come along as she wanted to sleep. It appears that our captains have lost all their motivation and desire for orienteering-related fun. We can only hope this is a side effect from the disappointment of BUCS being cancelled and that it will not be long term.

In the end, CUOCers Jeremy, Aidan, James and Lily, and DRONGOs Ben, Zuzka and Dan made the journey to Milton Keynes. On the way, we saw a roundabout called Walnut Tree but it did not have walnut trees growing on it which was disappointing. We also drove past Magna Park, a large distribution site which has a strange design on its buildings so they blend in with the sky.

We soon arrived at the Irish centre which we thought was quite a random thing for Milton Keynes to have. It turns out that it was just a village hall that was perhaps more Irish than your standard village hall, with lots of decorations that were green and a picture of Ireland beating England in Rugby. Bemused by the Irish centre, we registered and took a shuttle bus to the start. The area was a really nice area to orienteer particularly for a local ewent. Apparently SMOC didn’t think the courses were challenging enough however, so they switched 2 controls round which left many orienteers puzzled. Aidan was sad he missed out on sledging the previous day so decided to go sledging on his stomach down a snowy hill and said he felt like a penguin. This added burst of speed led him to win the Black course. Ben closely followed in 2nd with James also having a solid run and finishing in 4th. Zuzka also ran well on the short brown course to finish in 6th.

If Dan of the day was being awarded it would have to be split 3 ways. First to Dan who mispunched, and then to Jeremy who decided to follow Dan and mispunched the same control. It would also go to Lily who managed to make a 90 degree error and nearly ran off the map. But everyone came back happy and had fun running in the snow.

We then returned to Cambridge and some people went back to Jeremy’s house to finish off the weekend by eating the leftover veggie chilli.