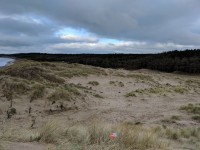 Today's training was in Newborough Forest, some of the tastiest skog in the country. Helen P had planned some nice courses around the extremely technical sand dunes, some of which followed lines of things, and some of which didn't. 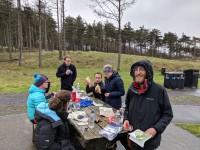 The hangers all agreed that it was significantly easier to find the controls when there were already flags there.

The weather was quite warm, but it kept starting to rain, which was a bit rubbish. Luckily we were based by the cars, so could hide when it got heavy.

After a while we stopped for lunch. After yesterday's meagre pickings, the addition of groovy bars was a much needed relief to all our hungry runners, and they were eagerly gobbled up.

The afternoon's activity, also planned by Helen, was a simultaneous relay, where everyone on a team ran at once, and the winner was the first team to have all the members back. For efficiency purposes, it was suggested that only the slowest member of each team needed to run, but in the interests of fair play, we did it properly instead.

Back at the cars, as we were waiting for control collectors to return, we met a cool Welsh man with a racing drone, which he sent zooming all over the forest at up to 100km/h. Aidan claimed that he is planning to make a drone some day, so watch this space for the next exciting development in amateur remote controlled aeronautic acrobatic engineering.

Meanwhile, Dan went for a swim in the sea. CUOC recommends not doing this; the Irish Sea is not known for its high winter temperatures. 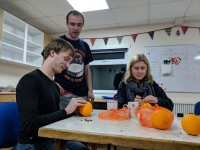 We headed back to the bunkhouse, where Paul finished mapping the house and garden, and no one made dinner because we had no ingredients. Shoppers were dispatched, and eventually they returned, not only with food, but with Fiona!

Everyone who didn't want to have to wash up later sprung into a frenzy of action, chopping vegetables left, right and centre. Lizbeth chopped some Bird's Eye chillis, increasing the spiciness from korma to masala. Aidan and John couldn't handle the heat however, describing it as "quite hot".

Pudding came in three chapters today: firstly there was ice cream cut into the traditional, if pedantic, geometric cuboids. This was quickly followed by a birthday jaffa cake for Dan, complete with lit candle. Even more quickly, we progressed to a real cake, complete with unlit candles, and highly viscous cream. Dan ate his without cutlery, and Aidan was awarded the Dan of the Day hat (again) for: pronouncing it 'cutrely'; ruining Dan's birthday cake suprise; and repeatedly saying "path and crag".

John then devised an experiment to work out if age really does affect the deliciousness of port. Paul commented that it "tastes o' port". We concluded that the 40 year old was better than 30 which was better than 20, and thus there is actually a point in aging port. A rePort of this seminal study is now awaiting publication in the Scientific Journal of Orienteering, and John is available for book signings on request.