This year saw another increase in DRONGO/CUOC teams in the Mourne Mountain Marathon, with Paul and Matthew, Helen and Fiona, John and Rory all participating in the annual two day boggy adventure. Rory arrived on Wednesday night, so that he could get over the jetlag before the race began; Helen arrived on Thursday and John, Matthew and Fiona came on Friday. Paul was already there, because we were staying in his house.

On Thursday night, as Paul was beginning to prepare stuff to put in a bag, he realised that he had two fleece jumpers, but didnâ€™t know which was warmer. Not wanted to miss an opportunity for Science, he boiled some water, and poured it into four cups â€“ one insulated by each fleece, one by a wool jumper, and one as a control. The temperature of each cup was then measured at 120s intervals. Unfortunately, most of the heat was lost through the open top, so it was difficult to see a significant difference in the results, so he chose to take the fleece which was lighter by 2g. 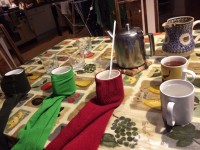 On Friday, Paul, Rory and Helen went to SuperValu and bought lots of food, finding that Super Rice, Cream of Vegetable and Penguin provide the most calories per serving in their respective categories of instant food, soup, and biscuit bar. We made a special trip to Tesco to buy nuts and raisins, because SuperValu didnâ€™t have any good enough.

On Saturday morning we got up when it was still dark (!) and drove down to Newcastle. The competition centre was in Shimna Integrated College, which Paul couldnâ€™t find first time, so we had to turn around once it was clear it wasnâ€™t any further down the road. We got registered and gear checked, then headed off to the start.

After the start, we got our control description sheets and marked up the map using super lightweight homemade roamers, then sped off into the forest. When we got up onto the mountain, it was quite misty in places, and pretty wet underfoot, making it reasonably tough going, but everyone made it round in one piece.

The MMM has a special format where each course will have a number of â€˜clusterâ€™ controls, where there are several free order controls to do as part of the linear course. This makes routechoice more interesting, and provides the chance for even more stimulating discussion at the end of the day.

Rory and John decided that in the spirit of fairplay they wanted to disadvantage themselves a bit, so they took a rogue routechoice down a steep slope and along the bank of a reservoir, which was apparently â€˜not very niceâ€™ This meant that they were out for longer than Paul and Matthew, but less long than Helen and Fiona.

In the afternoon it rained quite a lot, so after Paul and Matt had arrived at the campsite, they set up the tent and lay in it for the rest of the day. We assume that thatâ€™s what everyone else did as well, but donâ€™t really know because we had our eyes closed.

In the morning, we werenâ€™t awoken by one of the organisers singing â€˜The Mountains of Mourneâ€™, because he had a sore throat, meaning that our watch alarms had to do their job instead. We ate breakfast slowly, packed the tents slowlyish, and headed off to the start as late as possible.

Todayâ€™s course was wholly contained inside yesterdayâ€™s, which was aesthetically pleasing. It also included, for Paul and Matthew, some death defying crag climbing when a contouring leg went slightly wrong, and a steep gully descent across a black crag line. Rumour has it that some elite course runners are now having therapy to help them cope.

When we eventually came into the finish, Paul and Matthew discovered they had won the Elite, which was nice. John and Rory made 6th place on the B, and Helen and Fiona were first women on the B. We all went home and Fiona and Matthew made it to the airport just in time for Fionaâ€™s flight. 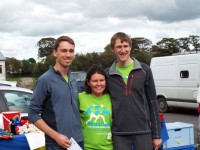 The next morning, Paul and John sat in the airport for a very long time waiting for Flybe to stop being a terrible airline. Unfortunately, at time of writing, this still hasnâ€™t happened, so at this rate John isnâ€™t going to make it into work today. Flybe later sent some spam email asking for feedback, which we provided.