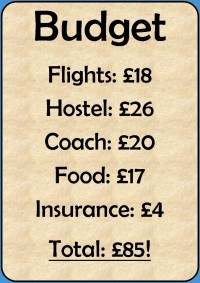 While many of Cambridgeâ€™s student population staggered out of clubs at the end of a long night, 8 members of CUOC made their way past Reality Checkpoint to meet the 4am coach to Luton. We were loaded only with the measliest of hand luggage allowances and as much clothing as we could wear, pockets stuffed with everything from compasses to woolly hats. This was the beginning of one of Ben Windsorâ€™s legendary cheap training trips, and this time our sights were set on GdaÅ„sk, Poland â€“ home to the areas used in the Junior World Orienteering Championships in 2004 and 2011.

As the bemused coach driver looked on, we sleepily disembarked the coach in a deserted Luton street and began a 3km walk towards Luton Airport to save the extra Â£5 cost for a journey all the way to Departures. Ben and Zuzka had found us some very, very cheap flights on the very, very purple airline Wizzair. Their carry-on luggage size is much smaller than any other airline but thereâ€™s no limit on how many coats you wear and how full your pockets are, so some of us looked more like barrels than people as we boarded the plane! 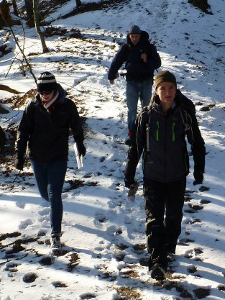 We touched down in GdaÅ„sk to find Poland covered in a few centimetres of snow but brilliantly sunny. Once weâ€™d met up with Nick Barrable (Editor of Compassport!) and Sarah Jane, we began the training. The first task was to get to the hostel so we could get rid of our stuff and start running. Since this was a budget trip, the only reasonable option was to walk the 8km from the airport including 4km through a forest called Szwedzka Grobla, the area partly used for the Junior World Orienteering Championships in 2004, while practising route choice for long legs. This helped us all get our heads around a map with more contours on it than all of Thetford combined, and we soon realised that the steep slopes were not much fun to climb. Once we made it to the hostel (actually on the east edge of the map!) it was time for some proper training, with a course planned by David to practise contour interpretation. Working out which way was up on the 1:15,000 map was not straightforward, despite the hills, re-entrants and spurs being pretty large! 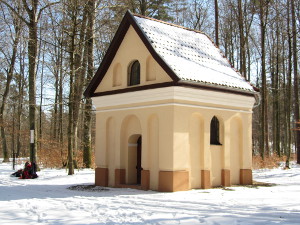 Wejherowo was the race centre for JWOC 2011, and since itâ€™s only an hour away by train weâ€™d have been daft to miss it â€“ even if the terrain is fairly similar to the first day. Polish trains are a little bit exciting if youâ€™re not familiar with them, and after the ticket machine decided it would only accept Polish coins (the largest of which is worth about Â£1) we left ourselves not quite enough time to validate all 10 tickets. So our resident Polish speaker had an extra unscheduled intervals session as she jumped out at each station, sprinted to the validator, punched a ticket and ran back to the train just before the doors closed. A little while later our tickets were checked, so Andreaâ€™s efforts were worthwhileâ€¦ 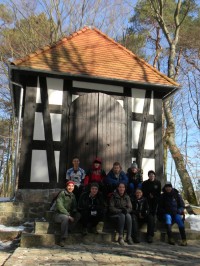 Zamkowa GÃ³ra (or â€œMountain Castleâ€) is a large forested area of intricate, undulating contours. Itâ€™s also covered in little chapels from the 17th Century, which have been beautifully restored recently. Itâ€™s a shame none were unlocked, but they probably didnâ€™t expect tourists in late winter. The morning training was a course practising long and short legs planned by Nick, with the added challenge of running on an 18 year-old map. The afternoon session followed rapidly on (it was freezing!) giving us all the chance to attempt part of the JWOC Middle Distance course.

We spent the evening in Sopot, a coastal town with an exciting Aquapark (itâ€™s got slides and a very violent rapid/river/whirlpool thing), and a windswept and desolate ice-covered beach for those who didnâ€™t fancy swimming. After a quick race along the length of the pier we found a cheap restaurant and ordered a couple of meals each (it was cold and we were hungry!).

The weather turned during the night and it snowed heavily the entire day. Undeterred, we trudged 4km across Gdansk to Ronald Reagan Park for a training exercise planned by Harriet. This was cold, but the course was good and had some tricky route choices to consider. Afterwards we caught the tram into the city centre to warm up and see the sights. After a little disappointment that the Torture Tower had been converted into a museum dedicated to all things Amber, Harriet led us on anâ€¦interestingâ€¦guided tour based on the tourist information officeâ€™s suggestions for students with two hours and â€œabsolutely no moneyâ€. But after an amazing hot chocolate in a cafÃ© on the cityâ€™s â€œmost romanticâ€ street (complete with mathematical graffiti and several very romantic cannons), we carried on to the afternoon area for an urban training session around the Politechnika GdaÅ„ska university. And we definitely didnâ€™t get any funny looks from the students. Not at all. 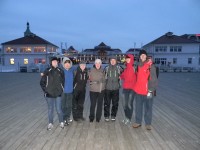 Our flight back wasnâ€™t until 6pm, so there was plenty of time for Zuzka to plan a tricky score course and some fiendish head-to-head map memory races. The snow had stopped by the time we started training, but we soon found that 25cm of snow can significantly reduce your running speed so the 40 minute time limit became more of a target than a deadline. We finished our four days of training with head-to-head races â€“ pairs of similar ability are given a map to look at, memorise the course and then run it using only your memory. Each opponent went opposite directions around the short courses, adding a competitive element to the already challenging task of visualising the whole course and memorising your attack points! But all too soon it was time to return to the hostel, eat some lunch and then trek the 8km back to the airport. This felt like a long way without the distraction of controls to find! But we got there eventually and after a delay while a truck that looked a little too much like a fire engine squirted water at our wing (it actually de-icing the plane, apparently) we headed back to Luton and (eventually) Cambridge.

Thank you to Ben for making the trip happen, and to Andrea for being our interpreter!