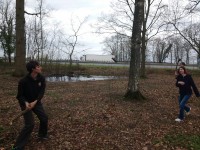 All the CUOCers have safely arrived in France for the start of the Pre-Varsity training tour. A variety of cars, trains and planes were used. The group coming in Ben's car left Cambridge early in the morning in the hope that they could have a walk in Dover before catching their ferry. However it was raining so decided to do the food shopping for that evening instead. OUOC requested steak and chips but unfortunately they ended up with spaghetti bolognaise instead.

The ferry journey was greatly improved by the presence of curling on the TVs. It was then into France and on to Fontainebleau. The Oxford minibus arrived first despite being on a later ferry; they probably overtook us when we stopped at a glorified lay-by and played an impromptu game of cricket/baseball with sticks as the bats and ball. Paul and Ben decided that they needed more exercise so hopped around the children's play area and climbed a tree.

After moaning at the lack of a Parisan M25 the car finally made it to the hostel before disappearing off to ferry people back from train stations. Despite their late arrivals hopefully everyone is ready to start training today.