Saturday meant the arrival of new training people in the form of Bristol and a few intrudersâ€¦despite their very late (/possibly early morning arrival?) they easily beat all the originals down to breakfast-the originals were obviously feeling the effects of the 5 previous days of training.

Once everyone had emerged we travelled in convoy to the area which was to be Tarn Hows: this time parking charges were paid/negotiated when a certain 20 year old was to be 17 for the dayâ€¦ The group trekked to the start, the tent was suitably erected in the middle of the linear marsh (and hence everyone's bags were left on the dry hillside outside the tent) and a penguin warm up took place which signalled the start of the days training.

We were going to move mid-way through the day to do some downhill training at Claife, however at some point during the morning it was decided that it would be better to stay and take in the bracken ridden hillside and the afternoon would instead be spent doing a peg relay. However, as usual debates took place and it was decided that the name was totally mis-interprative of the actual exercise. 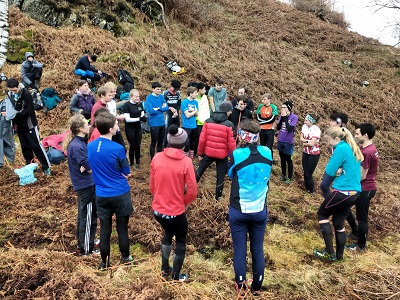 However, e v e n t s are never allowed (for some reason I still donâ€™t understand) and so it was instead renamed the â€˜Shoe tape raceâ€™.

The compulsory 1 hour lunch break was taken by most where entertainment today was different to usual as there was no bike/keys to hide then â€˜directâ€™ the owner to via radio. Instead attempts were made to derail Paul and Johns radio-corridor-O by various people attempting Northern Irish accents to various degrees of goodness. The â€˜linear knollâ€™ description by a certain â€˜amazingâ€™ orienteer also provided another source of lunchtime entertainment. Luckily John was not put off by these pretenders and made it back, much to Paul's surprise!

Lunch over everyone lined up in a circle (not quite sure how this works) and maps thrown in the air and the Shoe Tape Race had begun. People returned at various intervals some being more successful in collecting the tape than others-all the tape was useful for was to decide who was to collect controls, even then some managed to avoid getting controls despite lots of tape round their fingers! Due to the added time spent on the area, some people were sent to fend off the parking wardens for going over our allotted 4 hours, luckily they were big and scary enough and so no fines were incurred. 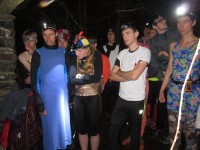 Back at the accommodation Bristol opened their Sinterklaas presents. Although I donâ€™t think they understood it properly: firstly, they knew who they were receiving their gifts from, and secondly the clothing was definitely not outrageous enough-with some people receiving no item of clothing and therefore looking rather normal and boring. CUOC/OUOC definitely won the Sinterklaas in this respect because everything is a competition of course.

As darkness was descending and alc-O costumes had been suitably donned (including many men in dresses and a wetsuit (which we later found would be very useful for some parts of the raceâ€¦)) we headed to the barn where race HQ was for the night. Rules were explained and nerves were building-who was to be the next â€˜Commonwealth alc-Oâ€™ champion?

Many many units later (or for non-alco many horrendous drinks mixes later), 4 orienteering loops completed, a map memory under the bridge and through the river deserving champions emerged. A rather unsteady and over excited John won the alc-O and guest Meg CD and Ben M were the non-alcO championships.

Luckily for the alc-O participants some people were thinking more straight than they were and so we could all sit down and enjoy a very tasty chilli, with jelly and ice cream to finish. Then came the tour awards with some top quality prizes including tinned tomatoes, pasta and even single lasagne sheets! The rest evening was then whiled away with some very tuneful singing with a mix of Christmas and non-Christmas songs alike. This was to be our last night together, however everyone seemed just too jolly to realise this and so the mood remained high throughout the night.