OUOC takes over: Undercover reporting from behind the CUOC front lines

I write from the tentative safety of the CUOC training tour. Everyone has been very friendly, so I have refrained from hiring a taster for my meals. However, I still donâ€™t trust Paul. His eyes are too small and close together. 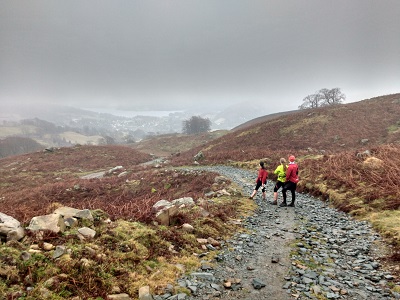 Today was â€˜rest dayâ€™. This is also synonymous with â€˜Silly Run Dayâ€™, so it was only appropriate that some of â€˜usâ€™ (I will use this pronoun for the sake of diplomacy) went on a foolish run around Fairfield Horseshoe. I heard that the last time this has been attempted, the conditions forced the group to bail early on. it could therefore only be more successful this time around. With the wind behind us, the group set off optimistically on the ascent to Fairfield (873m). It quickly transpired that some fancied themselves as de facto mountain goats and split off from the more leisurely expedition led by Helen â€˜hillâ€™ Ockenden (Disclaimer: This is not an established nickname). After completing most of the climb, many were asking why munching some fells was such a big deal (I was- in my head), but this quickly changed when we were hit by a horrendous gale on the top of Fairfield. The front group huddled behind a wall; some Groovy bars were noshed at pace; a customary photo was taken; Paul realised wearing a coat was wise and within 2 minutes we were back on the trail getting half of our faces frozen in situ. I certainly questioned what I am doing with my life. Soon, we were quickly out of the worst of the wind and annihilating the downhill- the front group even did a kilometre in 4 minutes and 20 seconds (this is really fast!)

45 minutes later we were enjoying some hot chocolates in Bilboâ€™s CafÃ©, waiting for the slo- apologies, leisurely group to return. Helen â€˜Hillâ€™ Ockenden owes Matthew Vokes and Ben Windsor Â£1.50 each, incurred by needing to renew the parking tickets. The lesson learnt here is that you should never back yourself without some sound empirical evidence present beforehand. 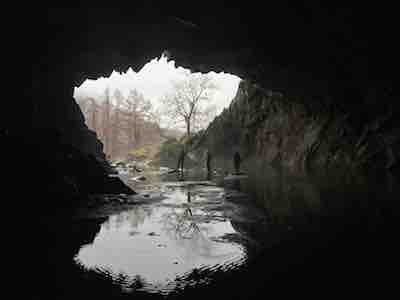 Another group went on a pleasant walk up Loughrigg. From the small pieces of information I have garnered from these trips, the Loughrigg walkers helped a useless walker find his/her way and secretly scoffed at his/her dire navigational ability. As a member of OUOC I would never demean the navigationally challenged, but Iâ€™m in a different place now and must grudgingly accept CUOC customs.

Jasmine underwent a hardcore solo pilgrimage up the Old Man of Coniston (803m). I hope that she found herself on that misty fell. Sadly, even if she did, I hear that finding herself in relation to the ground was more difficult. As I began writing this report, I was going to write a brief Obituary for Jasmine, but turns out that she is alive and safe. Of course, I am very happy and relieved about this, but itâ€™s inconvenient and off-putting to have your initial report structure changed mid-report.

Looking towards this evening, a Christmas dinner awaits the CUOC camp- the Turkey is roasting nicely as I type. The image of Matthew Vokes ramming his arm into the depths of the great beast will be lasting and may make it less palatable. I have been told that if there are scraps, Jack and I may be in for a treat. In fairness, there arenâ€™t enough chairs, plates or cutlery for all of us, so CUOC would obviously rather that we eat on our knees off the floor than nominate one of their own for such a degrading activity. I accept this- OUOC would do the same in this situation.

Finally, I would like to thank CUOC for this rare opportunity to guest post on their page. Merry Christmas.

Edit: No one was satisfied with a mid-day report, and therefore I now write the e v e n t s of the evening 15 hours late. I am not bitter, but I do feel that CUOC (or Paul at least) conspired against me to make OUOC reporting look inefficient and/or late. This is simply not the case- we are never late because reports are never written, and we never expect any emails from our â€˜Presidentâ€™ so any OUOC report is a bonus really.

The Christmas Dinner was a spectacular feast, and in contrast to most family Christmas dinners, there was actually an abundance of the item that people actually want: Turkey. A third of the meal went to Rowan before anyone really knew what happened; he demonstrated the frightening level of consumption that a person is capable of when it comes to Christmas food.

Sinterklaas was an interesting spectacle. Gifts, AlcO attire and some varied poetry was exchanged. Highlights included an epic ballad (delivered dutifully by Nathan); a wetsuit which Helen reluctantly donned alongside a Christmas tie. Jezza found his calling when he effortlessly slid into his lacey pink corset-thing- he should have been in a French boudoir all this time. Engineering is fortunate to have such a pretty man.