Today we decided to change from the provisional schedule and go to Blawith Common, so that we could use the open fell area while the weather still wasnâ€™t wet. Matthew improvised some replacement kites out of strips of plastic bag taped to knives, which were quite visible and really easy to hang by stabbing the ground. The hangers set of at 0847 to get to the area, and took fifteen minute scenic detour on the way when they took a wrong turning, but still got all the controls out in time. 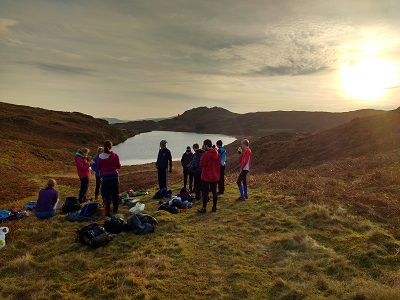 Everyone else arrived at the start soon after by an incredibly sub-optimal route involving a treacherous descent down some gorse-infested crags, but everyone survived the trip, and we were soon ready to begin some training. Jonathan had planned some courses focusing on contours, which made very good use of the area, which was a really nice, dry, brackeny open fell, with plenty of marshes and decent contour and rock detail. After everyone was finished we stopped so that Helen could have precisely one hour to eat her lunch.

After that, Jonathan had planned a clock relay, which Paul didnâ€™t want to do because it involves too much standing around and not running, so he and Matthew went to collect controls instead of taking part. Everyone else was sorted into teams by putting the ith fastest person with the ith slowest person, for 1 â‰¤ i â‰¤ n/2, where n is the number of participants. Because the middle pair always wins, Nathan and Rowan were given the CUOC tent as their item to move, which had the desired effect, as they didn't win. We then had a big search for a missing radio, which eventually turned out to be on the outside of Helen's bag, which was the only place in the bag that hadn't been searched.

When we got back to the hostel, Matthew and Fiona left quickly to drive to Cockermouth to get some real kites and do some shopping, while Paul made four huge trays of tun-majs pasta bage. We ended up having it in three stages because we forgot to turn the second oven on for a while â€“ Matthew and Fiona got back just in time for round two. When the time came for round three, Paul forced some incredibly hungry people to stand waiting, just because the food wasnâ€™t ready yet! Helen made a wonderful contribution by providing a delicious salad, consisting of crisp lettuce, juicy tomatoes and crunchy cucumbers, which everyone appreciated greatly.

This was followed by Ã¦blekage, with lots of ginger and cinnamon, accompanied by custard. Paul and Matthew raced to see if all the crumble could be cut and served before the custard was made, and Matthew won by a narrow margin.

After dinner we ate biscuits and drank tea while Jeremy and Harrison played the guitar. We then played Articulate, as dictated by Rory's schedule of evening activities for the week. Jonathan, Harrison, Paul and Fake Paul won by a narrow margin, even though they kept landing on 'Person'.