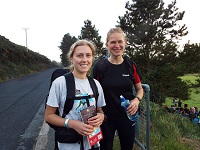 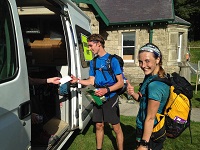 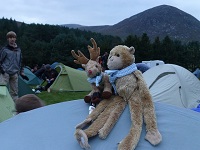 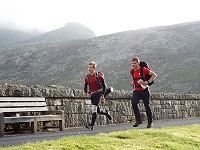 After having so much fun at it last year, a much-increased-in-size CUOC contingent headed to (or stayed in) Ireland for the Mourne Mountain Marathon. This is a two day long orienteering/fell-running race, held in County Down, where teams have to be self-sufficient with food, tents etc.

There were three teams with at least one CUOC member - Helen P and Fiona, and Rory and Jeremy did the B class, while Paul with ex-Harey captain Megan went for the Elite. Another PruÅ¾ina family team made for a very packed car on the way down.

Helen and Paul's dad organised the timing for the race, so Paul said that he had inside knowledge that the secret start location was almost certainly at Leitrim Lodge on the western side of the Mournes. After getting up at 6.00 and driving down to the race centre for registration and gear checks, everyone piled onto the bus to the start, which headed down a windy road and dropped them off at a reservoir at least 7km from Leitrim, making Paul very disappointed.

The first day's courses were very nice, starting off with some short legs before a huge one most of the way across the map, which Paul and Megan managed to mess up by going straight to the next control, leading to a 5km detour and a very long split time.

The courses all had some cluster controls, which work like a mini score course where you have to get all the controls. This makes the route choices more difficult, and allows for even more post-race analysis and geeking. The elite course had one which everyone did the same way, but the second one was shared with the B course, and there were more options

Paul and Megan came in first and set up camp, followed not long after by Helen and Fiona. The weather was nice, so they sat outside on the grass eating and basking. After a while they started to notice the notable absence of Rory and Jeremy, who had last been seen about 2/3 of the way around the course. Eventually they appeared, both limping, having taken 2.5 hours to hobble 2.5k through waist deep heather on an incline of approximately Ï€/2 to the horizontal from the top of Slieve Binnian to the campsite.

Once their camp was set up, both got physiotherapied by Helen and Paul's mum, before everyone went to bed at 7.00. Meanwhile, Paul ate as much of his food as he could, so that he wouldn't have to carry it tomorrow, after realising that he'd packed too much.

The next morning, everyone got up, ate breakfast and packed up the tents, before the mass starts at 8.00 and 8.15. Jeremy decided that his knees weren't functional enough to move him 22km, but Rory was determined to go out, so made a new C course team with Patrick MacDonald, whose partner had also dropped out.

This time, there was a longish leg at the start, before a 2 control cluster on the elite, involving either lots of path running, or lots of contouring in knee deep grass. Obviously, the CUOC team chose the contouring, and lost a fair bit of time.

The mist came down soon enough, making the mountains atmospheric and pretty, just in time for a cluster of four very close controls on the top of Slieve Bearnagh, which is impressive and spiky when you can see it, and steep and nasty when you can't. Paul and Megan made another mistake here, by marking a control in the wrong place, so they ended up 250m below the correct crag, separated by a line of very high slabs. Eventually they realised what they'd done and decided going up wouldn't be very fun, so they didn't, and moved on.

The courses ended with some nice legs across runnable-ish grassy mountains, then into Tollymore Forest to get up to the race centre. Everyone finished within not that long of eachother today, and were treated to sandwiches, tea, buns and fetching purple race t-shirts, before going home to the PruÅ¾inas' house for dinner, sleep and kit drying.

All in all, everyone had fun, and have taken an oath to come back again next year, as well as to encourage everyone they meet to do so as well. The PruÅ¾ina house was voted 'Best place to stay in Ireland' by an exclusive poll (results shown right), and anyone else in CUOC is encouraged to do the MMM in the future.