Home > News > CUOC go to the Harvesters
Log In

CUOC go to the Harvesters

Last weekend, 7 CUOCers (and Zuzka, who defected to DRONGO) had fun running around in the dark/fog/light at Cleeve Hill for the Harvester Relay. There were also a couple of other relays surrounding it, just in case we needed to do three races in two days. 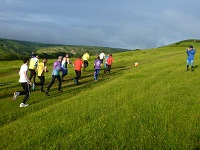 Helen, Paul and Rory left Cottenham on Saturday morning, in time to pick up DRONGO Sarah in Bicester, before continuing to Cranham for a Harris relay. Cranham is famous for two things: firstly, being the venue for BUCS relays back in February, where CUOC's teams included 'Federated States of Dobraland', and also for some kind of cheese rolling race. This time around, we kept up the Dobra related names, and 'Tom Dobra Appreciation Society' ran another relay on a different part of the area.

A Harris relay is a special format where there are a number of 'spine' controls, which every team member must visit, as well as lots of extra controls which at least one person has to go to. All team members run at once, and the team's time is the difference between the first start punch and last finish punch. The team managed to come 1st out of the proper teams, but were beaten by two teams who managed to get a -40% handicap just because they only had one runner. Most importantly, we beat the DRONGO (and JOK) team of Nick, Sarah and Tom. 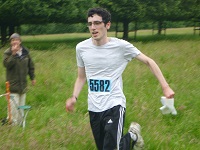 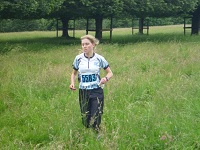 While the others were doing the Harris relay, Carrie, Fiona and Dave got lifts in Ben and Matthew's cars from Cambridge to Cleeve Hill. Unfortunately, hailstorms and graduation ceremonies don't mix very well, so Zuzka and Ben were delayed and we set off later than planned. En route we stopped off in/near Warwick to pick up Jeremy where we had a picnic on his front lawn with some nice normal tea kindly provided by Ms Knott, who was slightly confused by our insistence in eating outside rather than in her warm house. We got to Cleeve Hill just in time to register after meeting up with Helen P, Rory and Paul to form our complete CUOC team.

Not long after setting up the tents, the relay started. It was comprised of seven legs, each between 6.1 km and 13 km, starting at 11.30pm. Cleeve Hill consisted of runnable open grassland, along with the eponymous hill, an escarpment and a quarry for some contour practice. There was also lots of well-mapped gorse and golf greens which helped a lot with navigation!

Helen, Rory and Carrie ran the first three legs in the dark. Unfortunately, a thick fog fell during Helen's run which even Paul's brighter-than-the-sun headtorch couldn't penetrate, but she eventually found her control after wandering around both on and off the map. Fiona and Jeremy ran their courses in the daylight, whilst Dave and Paul got to sleep until 6am before both taking part in the mini mass start at 7am. Dave was very proud of finishing 10 minutes faster than Paul (who may or may not have had over twice the distance to run!). Overall CUOC came 13th out of 15th and, more importantly, were faster than DRONGO by an infinite amount (they mispunched).

Two CUOCers were awake to watch the prize-giving where combine harvesters were awarded (in trophy format) as well as beer. The sleepiest of CUOC finally awoke by 9.30am but only after Dave and Jeremy had threatened to take the tent down from around them. After munching some delicious pineapple-upside-down cake and raspberry cake provided by Matthew and Ms Knott respectively, we finally took down the tents (the rest of the campsite deserted by this point)! Jeremy and Zuzka left at this stage but the rest of CUOC headed to Dyrham Park for some more orienteering. 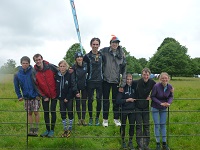 Three mixed CUOC/DRONGO teams took part in the Adams Avery Relay at Dyrham Park: DRONGO serious action (Rory, Matthew, Fiona); DRONGO don't shoot me (Carrie, Paul 'Prevzina', Dave); and DRONGO dibbers (Tom, Ben S, Helen 'Prwzina'). We weren't handicapped enough to run competitively for the A course so we entered the Ad Hoc race instead. All teams performed well, claiming all three podium positions - a podium we made ourselves using a National Trust fence. Notably, the only team that contained three CUOC members (DRONGO don't shoot me) claimed the top spot. DRONGO dibbers and DRONGO serious action came second and third respectively. In particular, Dave had a great run to come from almost four minutes down to overtake both other teams and bring Don't Shoot Me into the lead.