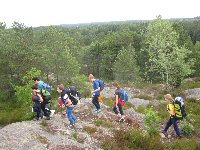 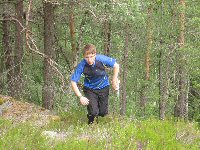 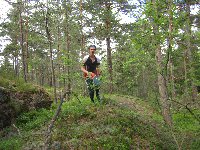 Today we went to Norway. We got the 0632 train from Cambridge to Stansted, but Helen only arrived at 0629 because her watch was wrong. When we got to the airport and got through security, Johntwig and Paul went to Boots to get a 'less than Â£3.79 meal deal', including the second most calorific sandwiches and clif bars, which were very nice. On the plane itself, everyone appreciated all the nice cloids and Helen was happy.

When we got to Rygge, we got a bus and a train into Moss, then went for a walk through the forest on a very narrow path to Molbekktjern, where we did some training planned by Helen, focusing on an (re)introduction to Scandinavian orienteering, with a few courses in some fairly rough and hilly terrain. Jezza fell down a cliff.

After we'd finished, Paul, Johntwig and Richard went shopping at Rema 1000 while everyone else went straight to the hut. Paul stood on a snake, but it didn't bite him so it was ok. They got as much shopping as they could carry, but that still wasn't enough for the entire trip. Walking back, there was a tunnel that they weren't allowed to go through and a big crag that they couldn't get down, so they had to take a long detour on small paths through the forest.

Paul coordinated making lots of veggie chilli, some rice and a large tray of brownies, which were very nice considering they didn't have the proper ingredients and took twice as long as normal to cook. After dinner, we had tea served from 'tea penguins' even though there was a perfectly serviceable teapot available. Helen decided Johntwig would appreciate having onion granules in his tea, but Johntwig disagreed.