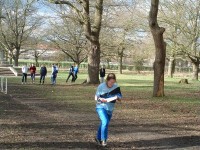 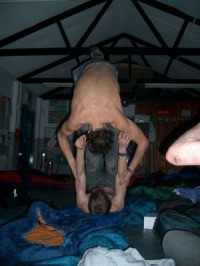 In fact, it'd just be easier to say we lost everything. Bugger.

On the men's team Varsity Match debutant (and former cuppers champion) Toby Kirk put in a fine performance to clinch the 4th place CUOC runner, despite being 12 minutes off the pace on the first control (what were the start intervals again?). He even picked up a fastest split. Another VM debutant, Ian Elder, put in a fine run to be 2nd placed CUOC runner, whilst the other two members of the counting team were CUOC veterans Alan Elder and Ash Bown.

In the women's race, Oxford again triumphed with Pippa Whitehouse taking the trophy (again!). A good performance from our Captain, Blanka led to her being the 1st placed CUOC runner, with Rosemary Dyer and Ali Ingleby being the other members of the counting team.

At the end of the day though Cambridge came through for the most important part - the post race party. The pace was far too fast for Oxford, and Ed Catmur was soon asleep, after one too many lager shandys. Even the bar itself couldn't keep up with the pace - running out of first tequila and then sambuca. On the dance floor Cambridge also asserted its dominance - I doubt anyone will ever see a finer set of moves to Chesney Hawkes' "I am the One and Only".

After that everything gets a bit hazy - there's vague memories of some acrobatics, mud, minibuses, a rather fine hat and then some more acrobatics. Must have been awesome.

And finally, no article would be complete without mentioning the minibus, and lack of parts of it (namely a left hand wing mirror), due to "technical difficulties".