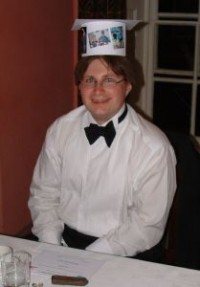 As the lucky recipient of the 'CUOC Graduation Award' at the annual dinner, I thought I might fill some of the space in this journal with some memories from my eight-and-a-bit years of studying orienteering...

Strangely enough, when I first arrived in Cambridge CUOC was well down the list of clubs that I was interested in, and although I had signed up at the Societies' Fair I didn't join or travel to most of the races that term. I was enticed into the chess club through an active college team, and by the chance of winning a large bottle of port if I joined for life at their squash. Given how few people were there, the odds were in my favour and I duly walked away with the port - I still get their newsletter too, so I think I got the better side of the bargain. Getting back to the point, it wasn't long before I realised that the chess club was full of really dull people and I needed to look elsewhere for some fun.

This led me to turn up to Sidney bar one Thursday lunchtime - these days that won't mean anything much, but for the first few years I was here, and for many before that, this was a time when nearly all the regulars would meet both for a chat and to sign up for races in the hallowed Blue Book. The spread of email seems to have killed this off, which is a pity as it was always useful for getting newcomers involved quickly. I don't think I've had a coleslaw sandwich since they ended, either.

As it happens, they were all very keen for me to come along that weekend for a race that they were organising and wanted help with, something called a SprintO... that year (1995) it was held in Epping NW, and I remember two main things about it; firstly that since I didn't really know what I was doing I took so long in the first round that I finished as the leaders in the second round went through half-way; and secondly that as the organiser didn't know what he was doing either three unfortunate people were left behind in the forest at the end, with little more than a limitless supply of cheap lager. They eventually found their way back to Cambridge just after the meal, and I don't think two of them ever came orienteering again!

While the SprintO was great fun, what really convinced me to start dedicating my weekends to the sport was the training tour at the end of that first term - though it started badly (the minibus wouldn't start, which in those pre-mobile phone days meant there were people wandering all over Cambridge trying to find out what was going on for a couple of hours) once we were up in the Lakes I knew I wanted to master navigating on the complex terrain there, which was a huge step up from the south London parks I was used to - and who knows, perhaps I might eventually? The December training tours were always a highlight of the year, as a sharp contrast to the flatness of East Anglia and for the variety of weather conditions ranging from snow flurries to brilliant sunshine, and even the year when many of the roads were flooded and I was very glad to be driving a minibus rather than a car.

I was always going to join the committee for the following year, but as what? In contrast to the more recent trend for arranging everything before the AGM, there were contested elections for two positions - Eric Roller beat Matt Mahr for Captain, while I lost Treasurer to Sarah 'Bob' Murty and ended up as Social Secretary and Icenian Organiser. This seemed enough at the time, but in the autumn Bob disappeared to play rugby and I ended up as Treasurer as well. The Icenian was a particularly interesting experience - the only badge raceI had ever been to previously was the last Icenian; I had trouble arranging parking at Bush Heath so we eventually walked people over from Mildenhall; and the week before I found out that I needed to join BOF to organise a race!

But it all went well on the day, and it didn't put me off repeating the experience later - I have an inconvenient habit of volunteering to do too much, such as organising the 2000 Midland Night Champs the evening before planning the EA Champs over the road, and spending the night moving control kites from one to the other; or the 2001 Icenian which I ended up organising as well as planning due to lack of volunteers. I wonder how long it will be before I control an Icenian to complete the set?

In 1997 I took over as Captain, as the only member of the previous committee that wasn't leaving. I was very lucky to have a committed group of people in the year below me which made it easy for me, though we did have a nightmare SprintO when our smoke generator set off the fire alarms at the University Centre, Andy Middleditch nearly killed himself falling down the stairs, and we ended up before the Proctors. Fortunately they sided with us, but the UC probably still think we owe them money and we won't be going back for a while...

The next year marked my first real attempt at mapping, with Santon Downham & Santon Warren. While time-consuming, I've found it a really goodexcuse to spend plenty of time in the forest, and it's possible to see things in much greater detail that when running through in competition. As with any activity, you get better with practice and if I look at that first map now there are some obvious errors in the cartography, but my more recent efforts look much better and it's quite satisfying to be able to hang the finished product on the wall.

Although it's not my strong point, this review wouldn't be complete without a mention of my own results, particularly in the Varsity Match. In my first year the VM was abroad for the first time - though the bouldery hillsides of Fontainebleau were rather wasted on me as I struggled round the B course, the party atmosphere was not. In the year I was Captain I didn't select myself and only made the A team through another's injury, which began a consistent if not very useful trend of finishing 11th of 12 in five successive years... 2003 was my last chance to get it right, and although my time in 8th wasn't quite enough for us to beat Oxford we were much closer than we had any right to be, and the day was rounded off nicely with victory in the raceI never had any trouble getting selected for, the beer race!

There's obviously lots that I've missed out, but as you're probably doing well to have read this far I'll finish here. I'd just like to thank the many members of CUOC I've known through the years (an alarming number of whom I've seen both arrive and depart) for being good friends and for keeping me involved in our unique sport.