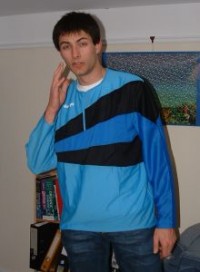 We were fortunate to have Rosemary working on the High Lodge map very early on, culminating in Blanka being able to have the courses planned in excellent time, with the sites taped and the controller (John Ward) being pleasantly surprised. John had volunteered somewhat under duress to control the race again, having been traumatised by CUOC previously...

Back to the day: Blanka and Mark put out controls, whilst a team of helpers assembled in Cambridge and was transported out by various kind car owners to set up the race site. High Lodge again proved its worth, with the large open area being ideal for the registration tent and an extensive run in for the finish control. The weather continued to be perfect throughout the day, and with only the small issue of being short of a map, the day passed uneventfully.

My own view is that the Icenian benefits from a great deal of work done far in advance, rather than a mad rush in the final fortnight. Having the map ready by the autumn, the courses planned and the sites of controls visited by the controller in November, then the maps completely ready for printing two weeks before the day is a must for a Badge race. We have again proven that CUOC are capable of organising an race of this scale on our own - we must continue to do so in the future by ensuring deadlines are met.

My sincere thanks to all who helped on the day, including several WAOC members - your hard work was much appreciated. Thanks are also due to WAOC as a club, who lent us various significant items of kit, the EAOA for the SI kit, and Bruce Marshall again lent us his trays (!). My thanks to John Ward, Blanka Sengerova, Rosemary Dyer and Alison Ingleby in particular for their respective roles in the race - it certainly would not have been possible without you. Finally, I wish the organiser in 2005 the very best of luck!