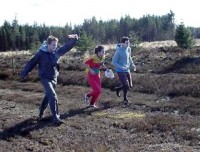 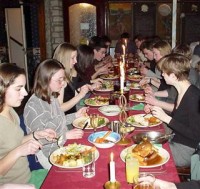 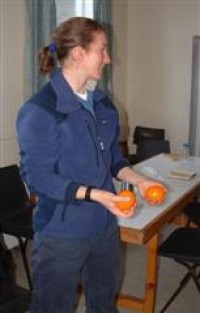 This year's Varsity Match didn't have a very auspicious start for CUOC. As Oxford seemed to be stacking up members (or former members) of the British Squad, we were rapidly losing runners due to bumps/lame excuses about work etc. Nevertheless we resolved to fight against the odds and set off with a team of sorts to sunny Yorkshire!

In the end, the results were much closer than expected and the dark blues won by only a small margin in the A classes. Both our captains put in fantastic runs to finish second in their respective classes, with Alan a mere 19 seconds behead Oxford's Ed Catmur. In the end, after combining the times of the seven scorers (four on the men's and three on the women's), Oxford won by only 14 minutes - certainly not the walkover we had feared! Thanks have to go to Matt Hook who stepped in at the last minute, despite having never orienteered before and had an excellent run. However, in the Women's B race, Cambridge emerged victorious with Jenny and Emma coming 1st and 2nd respectively, and DRONGO's clear victory over JOK meant that Cambridge were certainly not 'down and out'!

Of course, the most important race was still to comeâ€¦ The beer race heralded a light blue victory leaving the Oxford and combined DRONGO/JOK teams in the gutter! Obviously all the practice at the pub meets had paid off, although I think that more training may be required in this department, in order to repeat the victory at next years Varsity match!

After a varying number of hours sleep, everyone was up and about the next morning, preparing for the relays. The war-paint came out and CUOC's luckless mascot Wile E. Coyote prepared to be carried for a flying visit of the Yorkshire moors by Alan, Ash and 'Bob from Oxford' (aka Cath from Cambridge). The war-paint obviously worked as Cath's storming run on the final leg brought the team home victorious, despite the best efforts of Wile E. Coyote to strangle Cath on the final, long, uphill run in!

All in all, it was a great weekend and many thanks to Cath Ashton for organising it and to all the people who helped out. Next year we will be back and ready for a light blue victory!