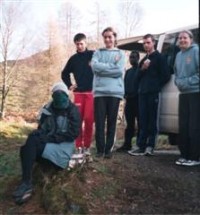 After two months spent running in Cambridge I was desperate to see some hills again by early December. And although I'd have to wait a few more days before returning to Scotland, the combined Cambridge and Oxford training tour to the beautiful Lake District provided an excellent opportunity at the end of Michaelmas term to get some good orienteering in on some great terrain.

This year the club managed to attract a good number of new recruits along on the tour - including some novice orienteers - which gave some hope of expanding the clubs ranks in the future. For the purposes of the weekend we had acquired the Duddon Estuary Youth Hostel in Millom, where we (almost!) managed to fit everyone into the available beds. Although the hostel was a little on the long side for travelling to the areas we had found to train on, the facilities were more than adequate - the hot showers especially were thoroughly appreciated!

Spread over four days and four separate areas, a variety of training exercises were organised by members of the two clubs, culminating in a short sprint race in Colwith on the last day.

Saturday's training took place at Great Tower Wood with only a minor Oxford contingent in attendance - the remainder of their party were to arrive that evening - but those present made good use of the Alan's line course in the morning and a Rosemary's clock relay in the afternoon.

Sunday was spent at Grizedale and the morning was used to practice relocation techniques in small groups while the afternoon was taken up with more leisurely pursuits - some hired mountain bikes at the local visitor centre and took off on a long loop around the extensive cycle paths, whilst others opted for some walking to discover some quite interesting statues in the forest.

Some notable highlights from Monday's training at Walney Island included the water control, manned by Alan (with his camera!), as part of the morning's control-flow exercise. Various photographs exist of some of the brave souls getting soaked, although exactly how SÃ¸ren made such a large impact is still debatable. Monday morning also saw some spectacular - although rather painful in a certain case - dune jumping from Messrs Elder and Brage. The second exercise of the day involved bearings to develop compass skills. Despite Walney Island being right by the sea-side it seems that this time no one was brave enough to rise to the challenge of taking a dip in the sea following the trainingâ€¦

With all the training under our belts now, Tuesday was time for a short race at Colwith. A short course was run early on, followed by the runners setting off in reverse order of their first finishing position on another loop around the area. Although the race itself was dominated by Oxford runners, everyone present seemed to have picked up some good tips during the preceding training days and some and made good use of those techniques during this race.

In all, this year's training tour offered some great training on some wonderful areas. The great accommodation and good food (special mention goes to Mark's curry!) also combined to make a fantastic weekend, thanks to everyone who put in their effort to organise the race and made sure it went well.