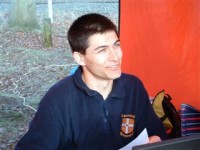 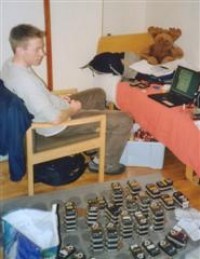 It began to dawn on me in November, following Jenny and Rosemary's success with organising the SprintO, that the Icenian was drawing near and I had to get it organised... Until then it had just been a vague idea hanging over me since that fateful AGM in the Biochemistry building, where I'd volunteered to do it. Fortunately other people had been thinking about it, and Alan and Rosemary along with Blanka had it in mind to finish re-surveying the Bromehill map over the Christmas holidays.

Alan and I had several discussions about the size of the map, and eventually decided to combine the Santon Warren and Bromehill maps into one. This of course meant more work on the ground, and some interesting experiments with OCAD! "Such is life" we said, and ploughed on. Things became slightly complex when the controller had to be swapped in December, then Alan was away in the US whilst I was in Finland (e-mail was heavily used!), but the map was with me on New Year's day, and Alan set about marking the courses.

The first day we got back in January, Blanka and I drove up to Peterborough to collect a load of the RAF's SportIdent control boxes, which made me feel a lot happier that we at least had _some_ of the kit! A few days later Alan had finished the maps and I had the task of getting them printed. Some (like me!) would have naÃ¯vely assumed this was going to be easy... Many long hours were spent coaxing OCAD to line maps up side by side, along with fiddling it so that I could use the trial version to copy map data and paste into the all (older) version! Mark Collis was a great help with various OCAD problems, and Victoire Press proved fantastic at dealing with very tight deadlines.

Having attended a WAOC SI kit training evening, Alan and I ventured forth to program large numbers of SI boxes. After 6 hours of doing so (whilst bagging maps), we managed it. This was not without its problems given that some of the RAF boxes appeared to be faulty... But we managed it, and with help from various CUOC members as well as some of my friends from around the courtyard, we filled trays with lots of pristine maps.

Saturday the 25th of January 2003 dawned brightly. Pity we were up long before then and it was raining. Rolf and Blanka ferried vast quantities of kit along with Alan and Rosemary out to Thetford at 05:00. There turned out not be enough space for me, so I was left sitting in stores until 06:50 when Jenny came with the MPV! We loaded the remainder of the kit and drove off to Silver Street to pick up the rest of the team. The master plan almost worked!

On reaching Thetford Mark was somewhat surprised to find that I'd never actually been to the area before, and therefore suggested a good place for the download tent. The reception and start teams got their tents up, and after an initial panic as to where Blanka's car was with all the paperwork for reception, we were up and running. It was at this point that we found we had no cables to connect the laptops to the generator. This was, needless to say, highly embarrassing. It was decided that Bruce Marshall should drive to Brandon and purchase the necessary items, and thus he did (I have since purchased them from WAOC for my own use!). Then the generator wouldn't give out any power... By this time the first starts had taken place, and I was somewhat worried. Fortunately Rolf found a hidden (unlabelled!) switch that switched the output to 240V from 110V, and all the equipment sprang into life! Mark and Bruce manned download, whilst I rushed between the start and reception... (note: next time we need to hire some walkie-talkies, as mobile coverage was non-existent!).

Just as I thought we'd have no more problems (even the sun was shining!), several participants came in to download to tell us that the control descriptions for several courses were incorrect. It turned out that I'd made an error in printing an old version with one control code incorrect! Alan and Keith (the controller) rapidly went out and re-labelled the affected controls, which appeared to correct the problem. My blood pressure was by this time fairly high.

Anyway... all's well that ends well, as they say. The race overall turned out very well, despite the error on the descriptions (several people's times were adjusted), with many people saying they'd enjoyed it. We even made a tidy profit! Many lessons have been learned, which I think will serve to make next time's even better - bring on Icenian 2004!