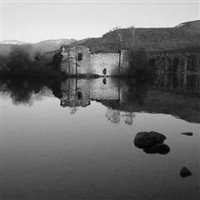 At the end of Lent term, whilst the rest of you came up with good (going climbing) and not-so-good (exam stress, writing up, etc.) excuses for not being able to come, a select group of Cambridge's finest (Blanka and I) joined Oxford's training tour to Scotland.

Joining our luxury transport for the week - a minibus that was a few weeks old, could happily cruise at 90mph on the motorway and even had a sunroof - at Leicester, the journey north was broken overnight at Oli O'Brien's house in the country, vaguely near Edinburgh, which he found surprisingly difficult to find... On the Sunday morning we were up and away early to get early starts at the Scottish CompassSport Trophy round, which was held at a newly mapped area called Moncreiffe Hill, a distinctive landmark when approaching Perth on the M90. We agreed amongst ourselves to all do the same course - blue - for a bit of competition, which backfired a bit when Pippa beat all of the men and wasn't slow to remind us later on. Whilst far from the most technical of Scottish maps, it was a lovely area to run on (apart from the 50m climb in 100m up to number 7) and I felt a bit sorry for the winners for having earned the dubious privilege of a trip to Norfolk for the final.

The early starts were to allow us to keep heading north in time for our first training session the same afternoon, at Inshriach. Although the most challenging bits of the area, moraine nestling at the western foot of the Cairngorms, were out of bounds so as not to disturb capercaillie, the parts we did go into were a nice gentle introduction to Highland forests in the remaining hours of daylight (and having trained in the best bits with WAOC last summer, I wasn't too disappointed.) Getting to Aviemore's Tesco five minutes after closing time dictated our plans for the evening; after fish & chips over the road, we headed to Glenmore Youth Hostel, our home for the week, then to Glenmore Lodge to try to get hold of our Emit kit and maps - unfortunately the appropriate people had gone home, so we had to settle for going to the bar instead.

Despite being based in the mountains, Monday was a day at the seaside - a scenic drive over the hills to the forested sand dunes of Roseisle. We started off with a line exercise, not too easy without slowing right down in places, before heading to the north end of the map for a short race, our first use of the Emit kit. After a clock relay, enlivened by some teams moving the wrong control flag, it was time to cool off with a short swim in the sea, though the North Sea was a bit cold despite the glorious sunshine we were blessed with all week.

The next day was a shorter one, at Anagach Wood near Grantown-on-Spey, and a bit different from my point of view as I was planning the exercises. The first was to test people's ability to simplify legs, by using master maps with a twist - you don't have a blank map to draw the course on, but just a blank piece of paper. There was quite a range of artwork, some detailed and artistic, some plain and functional, and one person just wrote each leg down in words. The other was a mixture of long and short legs, along the same lines as the one I planned in the Lakes but without a control on an island... This omission was rectified in the afternoon, as most of us headed for Loch an Eilein, which contains the island castle shown in the photo. It was a stronghold of Alexander Stewart a notorious character known as the Wolf of Badenoch, who ransacked towns, burnt a cathedral, and reputedly died after playing chess with the Devil! The two of us duly swam out to take a closer look, which earned us the 'Crazy Tabs' award at the end-of-tour dinner.

The last full day of the tour was the furthest away, at Plodda in Glen Affric, a very physical area which was used for the World Championships in 1999. The morning exercise was map memory in pairs, starting from the car park - we did rather better than Oxford's captain, who managed to overshoot a 300m leg by over a kilometre! The route back from the end of the exercise led down to the bottom of the valley, and up past the spectacular Plodda Falls, one of the highest waterfalls in the country. After some rather unseasonal sunbathing, we set off back down to the river and across the valley for the afternoon's exercises, starting with a relocation exercise in threes - as we were grouped with Ed Catmur, the main challenge was trying to keep up with him. Regrouping at the top of a hill, we were ready to set off for the final exercise, a downhill race with the finish nearly 200m lower than the start, though by then I was sufficiently knackered that it was still hard work. The tour dinner in the evening was at a local curry house, where we had no trouble getting the waiters' attention as we were the only customers.

Though we were going most of the way back (as far as Huddersfield) on Thursday, we were in no hurry to leave the Highlands, with another two exercises at Uath Lochan. First was some contouring work, which illustrated how hard it is to keep to exactly the same height, especially when the ground isn't very steep. The final item of the tour was a race with every control on a boulder - a tough end to the week, particularly as the run-in from the last control was a head-to-head with Blanka... suffice to say that over the spur was quicker than round the end :-)

The drive south was uneventful, particularly for those who weren't driving and all fell asleep. Returning on the train across the Fens on the following morning was a stark reminder of just how different the scenery varies across the county, and I know which I prefer. Another great training tour over, and I hope it won't be too long before I'm back in the Highlands again.