The JK this year was up in Yorkshire, with a great variety of different areas for us. 10 CUOC members made the trip up for a long weekend of very good races. Some of them stayed in a caravan, but others didnâ€™t. 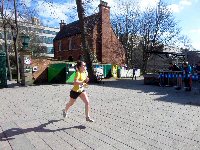 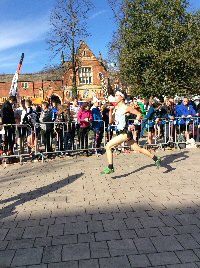 The Sprint was held around Leeds University, which is very complex with lots of stairs, quite a few underpasses and many, many levels. Paul got stuck in traffic, and arrived in Leeds at exactly the right time to begin warming up, so didnâ€™t have to stand around at all.

The Elite courses were using snazzy new SIAir timing, which means you can just wave your hand over a control to punch it. This meant that quite a lot of people punched extra controls by running past them, but they have lots of memory so it was ok.

We didnâ€™t get to use the new tent today, because the arena was too small, and we didnâ€™t have a banner because the pole is still broken after Varsity. So we used the DRONGO one instead. 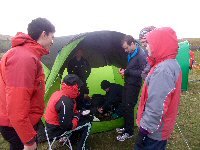 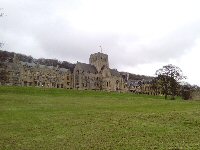 Saturday was the Wass Forest, which meant early starts in the caravan to drive there for our morning races. When the first car-load of people arrived at the site, we collected our tent and trudged up the hillside, surrounded by breath-taking views of hills and valleys all around. There was already a hubbub of activity, with other orienteering clubs beginning to mount their â€œâ€”OCâ€ banners and staking out their patches of territory. Reaching a suitable hay bale, we began to tug straw (straw or hay?) led by a very eager Ben who already seemed very proficient at this! Before long there was a carpet of hay/ straw and a tent full of bags and kit.

I had my race at 10.05am at about the same time as Rowan, so we set off down the hillside together, some people already having started and others waiting to begin their races. The Wass Forest was very interesting to run in, especially for someone who has only ever run in Cambridge and Thetford! There was very varied terrain, from steep slopes with controls hidden sneakily underneath them, to a winding stream (which I had to cross many times) and even a more exposed area complete with yellow gorse thickets and rambling farm buildings.

Overall there seemed general contentment about how the races had gone, with the usual grumblings about mistakes and what could have been faster. We definitely made the most of our time there, and Matthew, Ben and I even went to go and do some â€œshoppingâ€ at the stalls selling kit down the hill. Shopping for orienteers anyway! By the time it was mid-afternoon, some people seemed more tired than others (I seem to recall Matthew with his head on his lap for quite a while!) and it was also starting to get cold, so we said farewell to the Wass Forest and left for the Pre-O.

A fair number of CUOC/ DRONGO people took part in the Pre-O, which was set in the very beautiful grounds of a large abbey. Some of us took a more leisurely approach, preferring to take a photo of the map and complete it with the aid of group discussion and the occasional attempts to put off those who were doing the course. After the Pre-O, Matthew took a car-load to visit a ford (which is much more exciting than it sounds!) and a few of us went for a walk, before we all reconvened at a local pub for dinner at 6.00pm. Well, almost all of us. A certain someone didnâ€™t realise that such a small village as Ampleforth could have two pubs on the same road, and had been waiting an hour on his own at the wrong pub! Eventually though, we were all sitting around contentedly, most of us (but not all) having managed to avoid the downpour outside. And even Drongo the animal seemed to enjoy himself, taking centre stage on the table! 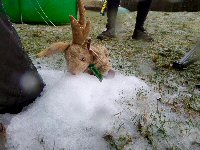 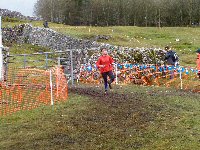 Today we were out on the open mountain at Kilnsey, a big area of open limestone grassland, with lots of contours, rocks and other fun stuff. Some people had a long course today, while others had a very long course, and a couple had a really really long course. No one from CUOC was doing the M21E, which was 20.1k long, but John was on the 14.5k M21L, and Paul had a 13.7k one, and Carrie had 13.4k.

Lots of people had decided they were going to need energy, so Ultrasport and Compasspoint both ran out of energy gels early on, and soon only had weird green jelly beans left.

The weather was quite nice for a bit. Then it started to rain, and hail. Then it was quite nice for a bit, then rained, then nice. The last starters had a real treat, getting to about half way round their courses still dry, then it started to hail very heavily, which hurt a lot, causing some top elites to retire. Some people carried on covered in bruises from millions of little ice crystals, and it eventually stopped hailing and began to snow, which was just as cold, but not as sore.

The snow on the ground made Helen I feel right at home, but she was disappointed by the severe lack of lichen to eat.

Everyone agreed that getting the tent was a great idea, so we might get another. Most of the tents in the arena stayed up, and almost all of the banners did too, which was surprising. John was pleased to have got a pop-up tent so he didnâ€™t have to bother putting up poles like other clubs did. 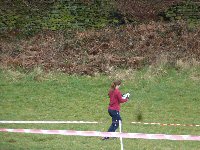 On Monday the relays were held at Storthes Hall, near Huddersfield, which was quite a small area of forest with some brambles in it, as well as a small area of university halls of residence. The courses were planned to start in the forest, then have a bit of sprint-style stuff, before going back into the forest again.

CUOC had 3 teams, two on the JK Trophy and one on Womenâ€™s Trophy. Helen P and Helen O (running for SROC) both didnâ€™t realise that the Womenâ€™s second leg runner didnâ€™t come through the spectator control, so had to handover quickly without much warning. Helen P had to be called by the commentary box, which was bad, but at least she got a shout-out.

Overall, a good weekend was had by everyone, with some pretty good results as well. Especially well done to Lindsay, who has only been to one race before this, but came back happy every day. 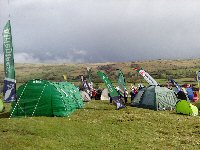