Home > News > Better than the Boat Race
Log In

Better than the Boat Race 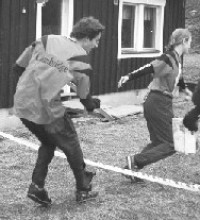 On 16th-17th March, 70 past and present students of Oxford and Cambridge universities went head-to-head in their annual Varsity Match. Thanks to the organisational prowess of Nick Barrable (FVO, JOK), the co-operation of his Swedish club, OK Ravinen, and the generosity of race sponsors Inter-Se Language Consultants, Ã–stgÃ¶ta Enskilda Bank, Synopsys and Coutts and Co., this year's race was held in the exotic locale of HellasgÃ¥rden, Stockholm. The intricate Nordic terrain was always going to prove a true test, not only of the abilities of the best Varsity orienteers, but also - with four men and three women to count towards each team title - of the depth of the two teams. Patchy snow in the forest, sub-zero temperatures, and frozen lakes and marshes added to the sense of anticipation that this 31st chapter in Varsity Match history was going to be a special one.

As it turned out, the Classic was held under brilliant blue skies and heralded a Light Blue landslide. Cambridge's Mark Bown and Rachael Elder swept aside all-comers to win their third individual title each in four years, and Cambridge won the men's and women's team trophies by convincing margins. Only in the men's B race did Cambridge find Oxford (in the words of my old high school principal) "a little too strong." However, in the battle of the ex-students, individual victories for Ann and Eric Roller ensured further success for the Cambridge old boys and girls (DRONGO).