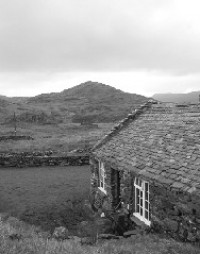 Newly introduced to the sport of orienteering, I found myself pulling up at the start of December to the gates of Ffridd Farm, in a remote area of North Wales. We were here for the annual CUOC training week, shared with the Oxford team. The converted barn we were staying in was well set up, if a little crowded. The kitchen was the hub of activity, whether that be marking maps, cooking huge pasta meals, or playing intense games of cards.

Despite the threat of an early start on Saturday morning, we set off to Cefndeuddwr at a reasonable hour. After a group warm-up run around the forest, we split up to run different courses planned by Mark. Being a novice, I had a go at a short course designed to demonstrate different orienteering techniques. I did most of it at a walk, but it was useful to have to think about different approaches.

On Sunday morning we drove to the nearby Llyn Cwm Bychan along a very steep road (Pippa's car really enjoyed going back up!). We paired up to do some reps with a difference (of Wayne's invention) up and down the Roman Steps, an old paved path up a valley leading down to the lake. The reps involved one partner reading a passage to the other while running, and having to guess the book from which it was taken. After this we did some longer reps around the area, confusing a solitary walker, before finishing the session. We then split into groups, some to run some more, some to walk and some to return to the farm. We went up the nearby Rhinog Fawr, a walk which turned into a bit of a scramble near the top. Map reading was a lot easier at walking speed!

Later that evening a very impressive Christmas dinner was rustled up in the basic kitchen, using every pan we had.

On Monday, we drove to Beddgelert, where we did a couple of exercises around the forest. The control picking exercise was enjoyable, but we gave up in a couple of areas. After the last night at Ffridd, we set out to Llyn Elsi, from which we would continue the journey home after lunch. The lake was on top of a very steep hill, but the climb was worth it. We did courses in groups, running separately and deciding by consensus when we had reached the right point. I definitely performed best on this day, so the experience gained over the weekend had paid off.

The whole trip was well planned and the accommodation was just right. Many thanks again to all those who put in time and effort to make the week successful. And the training obviously paid off in Sweden this year.