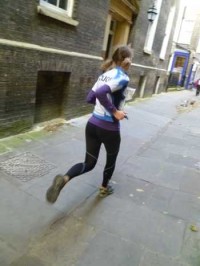 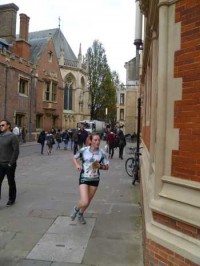 Now for the third time, Cambridge city centre swarmed not just with tourists but also funny looking people holding maps and compasses and swiftly weaving in and out of the crowds. This is what the Cambridge City Race organized by the university orienteering club must have looked like to those uninitiated. The preparation for the race had been tough at times, but as Joe Hobbs, one of the organisers remarks, â€œthe final week seemed to see things come together, the maps and numbers turned up and the weather held off (mostly).â€

From the early hours of the morning, the organizers had been busy setting up the arena at Jesus Green for the arrival of the 350 or so competitors. The weather seemed unsure about whether to welcome the competitors with rain or sunshine, so in the end it settled somewhere in the middle. With starts between 10.30 and 1.30pm, competitors were setting out at one minute intervals on the intricate courses expertly planned by CUOCâ€™s Mark Salmon. The minute preceding the traditional five beeps, which signify the start, was enriched by the start marshals warning the competitors of the dangers of Cambridge in the form of the suicidal cyclists that plague our roads and even worse, the crowds of pedestrians that block the streets. Unfortunately, the race coincided with the graduation day, so the crowds were the major problem facing the runners as they set out into Cambridgeâ€™s streets and colleges.

With the longest Menâ€™s course being 7.5 km straight-line distance and the longest womenâ€™s course 6.5 km, the runners ended up covering a significantly longer distance, as Cambridgeâ€™s winding alleyways provided more than enough of a challenge. The major obstacle that awaited runners of all courses was a speciality of urban races: the extremely high frequency of uncrossable walls and hedges that often led to nasty surprises in the form of being halfway between two controls and suddenly realising that the chosen route choice is impossible to carry out due to an uncrossable feature.

Thanks to the months of preparation, the race ran relatively smoothly but, as Joe Hobbs comments, â€œwe like to think that we planned for all eventualities, but I have to admit I didnâ€™t foresee a bomb scare!â€ Even that though did not stop the competitors from successfully returning from their courses, albeit with some extra metres in their legs from running round the market square.

In the end, the winners of the two main categories- Menâ€™s/Womenâ€™s Open respectively were Leon Foster and Jo Reeve. Carrie Beadle of CUOC upheld the prestige of the home club by racing into third position on Womenâ€™s Open course, receiving a generous prize from our BUFF sponsor, and ex-member Ben Windsor proved the efficacy of CUOC upbringing by taking the 2nd position in Menâ€™s Open. See you again in two yearsâ€™ time!