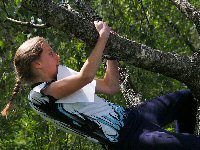 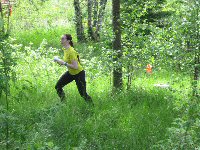 Having arrived early in the morning we had decided to sleep in the main building rather than the accommodation building. We were awoken by the arrival of the Hare and Hounds looking for breakfast. Natalie very kindly made a large batch of waffles and we were all fed. The morning was started off with the MicrO which traditionally had controls all round the hut and in the tree. Results are available here

Once all the controls had been collected, John headed off into the forest to hang the controls for the forest race. The first part of the race was on the hill to the west of the hut. It then went into an area of housing before returning to the forest near the hut. After the spectator/rehydration control there was a short loop before the finish. Results from this are available here

After a late lunch we collected the controls from the race on the way to the OK Moss training. Unfortunately this took a little longer than expected and we arrived at the training quite late - only finding it by the helpful line of white tapes leading into the wood. The training consisted of a 4km course around Molbekktjern, and for some this took quite a long time. It is perhaps no surprise that the planner was waiting for a CUOC member to return, in order to begin control collection.

After Rory had returned from the forest we headed off to the supermarket to stock up on cheese, milk and other necessities. We arrived back at the hut at 10PM and started preparing tea (pasta bake and chocolate cake). Ben arrived at 1AM having walked from the #airport . We are sorry the website report is a bit delayed but we wanted to go to bed! 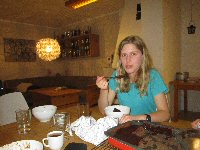