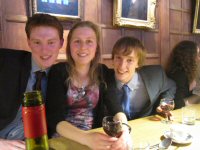 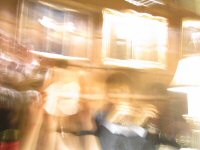 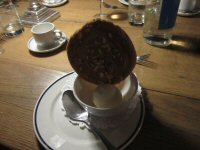 After nearly-everyone had arrived at Dan's room we headed across to the bar for pre-drinks. Trinity college were sparing no expense and the drinks were served in the most beautifully elegant #glasses I've ever seen. Some went for the G&T whilst others risked the cloudy looking yellow green liquid which turned out to be posh apple juice.

Dan decided that we should attempt to get a photo before the formal. There was a really nice light reflected around Trinity Great Court and it would have made a nice photo. Unfortunately hundreds of other people had a similar idea and we ended up aborting and heading straight for the lengthening queue in the hope that we could still get seats together.

The starter was prosciutto with red cabbage, or for the vegetarians just red cabbage. There was interesting conversation at the table, which as expected included trains at least once. This was followed by beef olives with Mediterranean roasted vegetables and suspicious chutney, or pasta with green bits for the vegetarians.

After an accident in the kitchen in which all the soufflÃ©s were burnt, the quick thinking chef managed to get hold of some cookies. These looked quite similar to those on sale in a well known supermarket next on Sidney Street, and were served with a tiny blob of ice-cream. We can only hypothesise that the rest of the ice-cream must have been used to put out the burning soufflÃ©s. The cookies and ice-cream were very good.

After the fellows had left (should we have been standing?), a certain small denomination coin made its way onto the table and the remaining wine was consumed. Coffee and mints followed. We decided it would only be appropriate to have a mint-race. The person after Dan (who was not from CUOC) appeared to disagree - the look of horror on his face was priceless. We headed back to the bar to get post-drinks. Dan was keen to take a group photo on the way, but we yet again told him it wasn't the priority at that moment in time. As the elegant glasses used for pre-drinks are so difficult to wash, they had been thrown away and the college had bought some more for post-drinks.

We headed outside for the group photo. Suddenly, a freak and rather #localised downpour appeared, and those of us without coats were drenched. Having managed to take a few photos before the arrival of the monsoon, we headed inside for (very early) morning tea. As is normal with CUOC socials, everyone had a good time.

Anyway, back to work. There's something on the horizon beginning with E, and it's even worse than Emit...