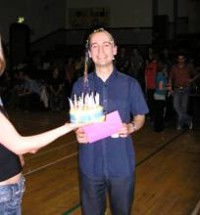 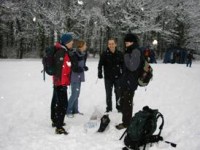 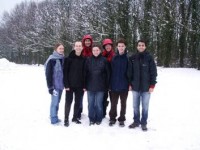 Prologue: Heading to the great North

On a dull mid March Friday afternoon, a group of seven courageous CUOCers meets at Cambridge train station to undertake their journey to this year British Universities Sports Association Orienteering Championships held on the challenging Scottish premises of the Edinburgh University Orienteering Club.

"Vaclav" one of the kids answers, "He went to get a coffeeâ€¦"

"No, please tell him to hurry up, the train is about to depart and itâ€™s the last connecting one!" A few seconds later the train doors shut behind Vaclav.

First act: The individual day in the hills

After one and a half hour sleepy coach trip from Edinburgh, we reached the competition field in South Achray, a few tens of miles north of Glasgow. We were welcomed by a very Scottish drizzle swept in our faces by a cold breeze. A series of hills were standing in front of us, the highest of which was hiding its summit in the clouds.

"Anya, I am pretty sure that the first control is going to be hidden some where at the top of that hill"

"What?! I am not going to climb that for any reason!"

Fortunately, we realized soon after the start that control no 1 was the spectator one and that indeed control no 2 was only a mere 150 m climb along the side of the hill adjacent to the feared one. Upon reaching the control, one could have an amazing view over the people panting their way up from the start.

The first part of the course kept most of us physically engaged with the ever changing contours, without missing the chance of letting us appreciate the dark green bits of the map (read leg 8-9 of Men B/Women A course). The pace drastically changed in the second half, which required much more watchful navigations across small marshes, ragged contours and path networks. Probably the ice cold river crossing was intended by the planner to alert our senses for the imminent change.

The steep and muddy Scottish terrain proved tricky even for Sheffieldâ€™s stars Oli Johnson and Matt Crane who fell behind EUOCâ€™s Murry Strain into second and third place respectively. In the women A race was Rachael Elder from SHUOC to win over 5 minutes ahead of Helen Palmer (Paisley) and Rebecca Roberts (Loughborough). Many CUOCers had good runs, with Alex Copley and Anya Crocker making the clubâ€™s best times.

The evening kicked off with a buffet dinner at a local Chinese restaurant. I cannot recall what sort of delights were served, but I believe everyone welcomed the all-you-can-eat option, so much needed to refuel for the night ahead and the next day. The meal was soon washed down by a cold pint in the form of the infamous beer race!

The biting cold night was fought in the most tradition Scottish fashionâ€¦ no, it wasnâ€™t by downing whiskey â€“ but in the much more elaborate form of ceilidh dancing! Every body performed extremely well on the floor with a special mention to Chris. The night was finally crowned by the celebrations of Edâ€™s 24th birthday.

The next thing I recall was to be woken up by a glare insinuating through the curtain. At last the impossible turned true, a crispy sunny day! This was a dream I did not want to be awoken from. I cannot describe my disappointment when, soon after I jumped out of bed filled with excitement, I discovered that the glare was coming from the icy white stuff (the way most Britons refer to snow, apparently) which covered up Edinburgh overnight and was still falling.

Indeed the sweet plains of Kinneil Wood were coated with 15 cm of fresh snow, making ideal for a ski-O race. Instead, we found ourselves ploughing our feet into the white mantle. Given the extreme conditions, we all did very well, especially in the snow fights!

The extraordinary weather conditions which seemed to have been put in set especially for the BUSA weekend, translated into horrible delays and cancellations of many southbound trains. This sparked off the final race to grab one of the few spare places on a London train! Despite all odds, we managed to reach Cambridge faster then this yearâ€™s Varsity match area! Overall it was a memorable and very enjoyable weekend, which awaits to be repeated next year in Durham.