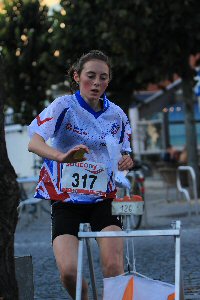 Club captain Carrie Beadle has been competing for Great Britain at the Junior European Cup in Belgium this weekend. The competition consisted of a Sprint Race around the town of Lommel, and a long race around an area of mixed open and wooded sand dunes. The weekend will finish with a team relay in another area of sand dunes.

Carrie finished 39th in the Sprint race, just 3 minutes down on the leader. Other than potentially a small mistake on control 7, split analysis would suggest Carrie had a fairly clean run. Results available here

The long race was 10.4km (which I think is quite long for a women's race) and featured a mix of technical partially forested sand-dunes. Carrie finished 41st - full results here

Even though Carrie was running for GB, all the members of her relay team were from her home club LOC. Carrie handed over to her younger sister Natalie, with Sarah Jones on the last leg. The team finished 19th. Results available here