As we had no urgency to get up today, breakfast was a rather leisurely affair, with scrambled eggs making an appearance (the first of the day's experiments to use up the 14 remaining eggs...).

John had planned a one-man relay for the morning (so just really a mass start race!), though the courses were individually personalised - this had caused Fiona & Matthew some confusion when printing the maps earlier in the week when they saw courses named "Carrie" and "Fiona" etc. until they realised what was going on! The planning turned out to be near perfect, with Carrie, Matthew and John arriving into the finish in that order separated by less than 30 seconds. 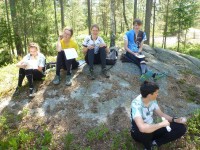 With 4 of the group leaving we decided that lunch would be late to get a full morning of training in, so we set off on a short walk to Skihytta at the northern end of Mossemarka Syd. Matthew had planned a 'long legs' exercise - 3.4km with just 3 controls (traditional Scandinavian planning!), whilst Fiona had a toothless Vampire to provide a fun end to the tour. True to his word, Matthew showed that it was nearly impossible to catch anyone in the area, finally managing to swap the Vampire control card he started with by ambushing John right at the death as he approached the finish, thereby bagging the winning control card.

The second experiment of the day did not fare so well when we intended to make chocolate waffles but instead ended up making icing... However, this was OK as Ben had baked a chocolate cake the day before which needed something to go on top! Note to self: cocoa powder is not a suitable substitute for flour. 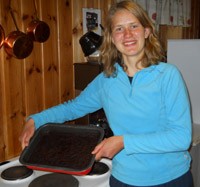 With Ben, Zuzka, John & Carrie safely on their way to the airport, Matthew & Fiona collected in the morning's exercises, before starting the third experiment - cheese (& white sauce - no flour!) free lasagne (using all the left over cans and vegetables we could find). This turned out rather well - we feel we have created a new meal: lasagne bolognaise, which of course was yet again eaten al fresco. Using the multi-purpose "waffle batter" (with yet more eggs that need to be used), the fourth experiment became a chocomelettie (that's a cross between an omelette and a chocolate brownie).

Now with just the 2 most-dedicated orienteers left, the hut is very quiet this evening, we hope everyone else has travelled back to Cambridge safely and enjoyed their time here (but just think what you're missing out on by not being here for the last 2 days)!